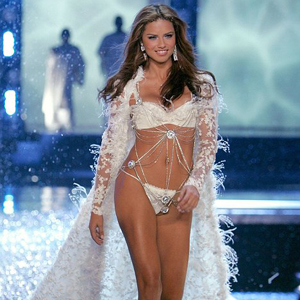 Adriana Lima was worried she would lose her figure after having a second child.

The stunning brunette; who has been working for lingerie brand Victoria’s Secret since 2000; had her second daughter, Sienna, with husband Marko Jaric in September 2012, and was worried about how it would affect her body and career.

She explained: "You can’t fight nature! I had no idea what was going to happen to my body after I gave birth for the second time, and whether I’d be able to get back into shape or how fast."

Adriana; who is already mum to three-year-old Valentina – opened the runway show for Victoria’s Secret two months after having Sienna and a combination of determination and hard work helped her get her figure back.

She told Latina(dot)com: "It was the biggest challenge in my life, for sure; I decided to set that challenge for myself and it really gave me a goal to work towards for getting my body back in shape."

"I did the best that I could, and luckily I was a part of the show. It was a really a great, but tough experience for me. I had my trainer Michael Olajide, Jr. come to Miami and we were working out, but it wasn’t easy. With a newborn and an almost three years old, to find time to work out isn’t easy."

Kering's Stake in Altuzarra Measured at 40%