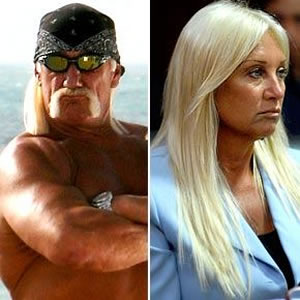 “The war is over,” Linda told press after the hearing, in which terms as to how the couple’s millions would be split up were not made public. "I still love him. He’s the father of my children," Linda added.

Happy to be able to move on, Hulk said: “When you’re married to someone for 23 years … you hope for the best …. We just got torn apart.”

Hulk is looking forward to moving on with his life and is very hopeful that he and Linda can maintain a friendship and work together as parents to their two children.

Linda Hogan also issued a statement Tuesday afternoon, saying, "My husband took the big step of stopping this escalating war by making the decision to put this behind us. I am grateful to him for realizing that our family can be happier and stronger by working together. He and I both love our family dearly and look forward to working together to make it stronger than it has ever been. My family means the world to me."

Linda filed for divorce from her husband in November of 2007, just three months after the couple’s teenage son, Nick, was involved in a car crash that critically injured his best friend.

While terms of the divorce agreement were not made public, Hogan will likely move back into the family home in Clearwater.

Jessica Simpson Not Allowed In