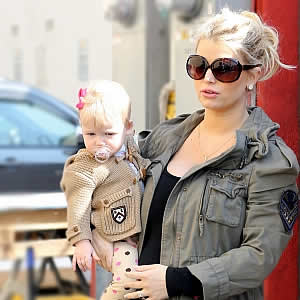 The 32-year-old pregnant Fashion Star mentor confirmed on the show that she is having a baby boy! “It’s a total different pregnancy. I just feel awful. I’ve been vomiting. I had no idea that a wiener can make me nauseous,” Jessica said. “Oh shucks! Well I guess told the world that I was having a boy.”

“I just outed that I am having a boy. I can’t believe I did that. It was not planned,” Jessica added. “It was kind of out and about in the press that I was having a boy. I was like ‘How do people know these things’?”

“I keep planning on getting married, but I keep getting knocked up. It’s just one of those things. Maybe I should go back to when I was younger, I was a virgin before I was married, so maybe I should just completely reverse and stop having physical contact altogether until Eric [Johnson] and I actually say I do,” Jessica said about having children before marriage.

Also pictured: Jessica‘s dad Joe Simpson making his way into the studio that day and Jessica posing backstage at The Ellen DeGeneres Show the day before. – justjared