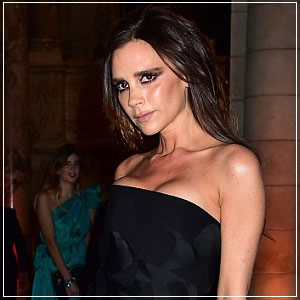 Victoria Beckham’s cleavage was on display in a busty strapless gown at the Alexander McQueen: Savage Beauty Fashion Gala in London tonight.

The former Spice Girl gave her bust a boost in the stunning gown as she stepped out for the event at the Victoria & Albert museum with her husband David Beckham.

Victoria was back to her Posh Spice best as she pouted for the cameras, revealing her sunkissed tan. Going heavy on the eye make-up, Victoria’s dark eye-shadow appeared to bleed into her full eyebrows.

The dark-haired star kept the rest of the look fairly neutral with a nude lipstick and she went easy on the blusher too. Victoria, who wore a black gown with cut out panels in the full skirt, arrived hand-in-hand with former footballer David, who chose a black tuxedo and bow tie for the occasion. It must be hard trying to stand out when you’re surrounded by supermodels such as Naomi Campbell and Kate Moss, but Poppy Delevingne did just that as she wore a see-through dress to the Alexander McQueen gala. Poppy, 28, wore a pair of high-waisted black pants beneath the sheer gown with peplum detail. The star, who is sisters with Chanel beauty Cara, wore her hair in a messy up-do for a bit of rock chic.

Kate Moss, who was joined by her husband Jamie Hince, wore her hair down but the blonde beauties wore VERY similar dresses. Kate rocked the see-through black lace with a bodice beneath the long-sleeved gown. She had already attended the V&A earlier today, possibly for a sneak preview as on display at the fashion exhibition of the year, there is a 3D holographic image of the beauty, dressed in a white organza gown.

The celebs were there in celebration of the first and largest retrospective of the late designer’s work going on display at the gallery, which houses 244 of the brand’s garments.

Kendall Jenner Signed to be New Face of Calvin Klein