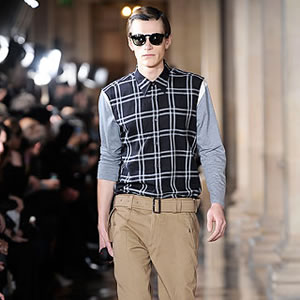 The svelte mood and the urban warrior, the 80’s playboy all have taken a backseat. Today designers that epitomize easy sophistication have taken over. Labels that guaranteed quality and the latest menswear collection of Fall/Winter 2010 were Giorgio Armani, Dries Van Noten, Lanvin & Prada.

Giorgio Armani is unstoppable. He makes both desirable and easy to wear pieces. Giorgio Armani’s collection is always modern. He is reached that pedestal of trend setters where he is beyond match and reference. For Fall/Winter 2010 menswear collection he presented a drastic revolutionary look. His statement lies in the use of luxurious and often surprising fabrication. Classic shapes, the shawl collar, the full legged trouser, meticulously tailored suiting and proper top coats came with shots of electric blue and muted green. He mixed sumptuous velvet, tonal prints, chevron and checkerboard quilting.

Muiccia Prada showed her latest menswear collection alongside her women’s Pre-Fall for 2010 for the first time. A printed runway illustrated the political, cultural, environmental and economic climate of the decade gone.

Alber Elbaz has transformed Lanvin into one of the most sought after and delightfully wearable labels. Lanvin is known for its sophisticated take on Parisian streetwear and refined suiting. This fall the Lanvin man walked a fine line between the rough and refined. Lanvin coats and outerwear came raw edged, some with dropped shoulders, some in dulled black leather and some nipped at the waist with a v shape.

The Spring Essentials That All Men Should Have