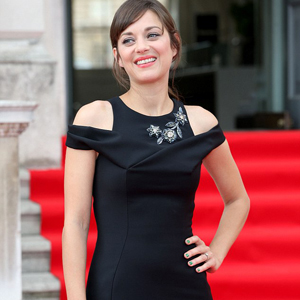 â€˜It's not the end of the world if you look like s**t!â€™: Marion Cotillard looks far from it at the Two Days, One Night screening in chic LBD

‘It’s not the end of the world if you look like s**t!’: Marion Cotillard looks far from it at the Two Days, One Night screening in chic LBD. She’s a red carpet darling who rarely puts a fashion foot out of place.

But Marion Cotillard has admitted that she doesn’t really care if people think she doesn’t look good. The French actress certainly looked far from bad at the Somerset House screening of Two Days, One Night in a chic little black dress.

Marion told Stylist magazine that she finds it funny that some stars get upset when they are given a bad style review. ‘I’m never really aware because I’m not very interested in it,’ the 38-year old explained. ‘I don’t need it. Sometimes people I work with read blogs, so I see the occasional thing about myself. ‘It makes me laugh because either way you can’t change anything. It’s not the end of the world if you look like s**t!’. Luckily for Marion, she has a number of fashion houses making sure she looks anything but, and praised Christian Dior’s creative director Raf Simons for his Autumn/Winter 2014 collection. ‘I’m very impressed by the way Raf reinvents his world all the time,’ Cotillard says.‘ He’s a very special person. ‘The way he mixes his very modern vision of clothes and the Dior house is really, really impressive.’ Marion was the face of Lady Dior’s handbag range in 2008, and has appeared on numerous fashion magazine covers including Vogue and Elle. But she’s been known to take roles that go against her glamorous public perception. Certainly in her latest film Two Days, One Night (Deux Jours, Une Nuit) the actress plays an average woman who has only a weekend to convince her work colleagues to give their annual bonuses so that she can keep her job.