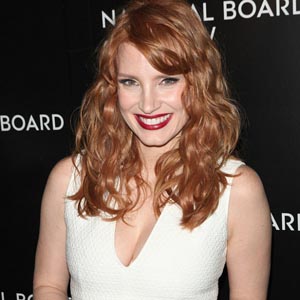 Jessica Chastain is a vision of old Hollywood glamour in plunging white dress with scarlet lipstick at star-studded gala. Jessica Chastain was a vision in white as she evoked old Hollywood glamour in a spectacular ensemble. The 37-year-old beauty cut a flattering figure that recalled 1950s Hollywood as she attended the National Board Of Review Awards Gala at Cipriani in New York on Tuesday.

She claimed the award for Best Supporting Actress for her role in A Most Violent Year – which was also named Best Film. The Interstellar actress wore a white two-tiered diamond-patterned Alexander McQueen dress that had a low-cut neckline, and completed the look with white Christian Louboutin shoes that had silver embellishments, and accessorized with Piaget jewelry. Jessica styled her fiery tresses in seductive waves that rested on her shoulders and included side-swept bangs. She had on a simple amount of makeup and striking red lipstick that called attention to her full pout, razor sharp bone structure and dimpled chin. And there was no shortage of stars dressed to the nines who joined the stunner at the ceremony that celebrated the year’s best in cinema. Julianne Moore wore a Dolce & Gabbana dress that featured a floral-patterned black lace top with nude mesh over an opaque bustier. The bottom portion of the dress cut pass the knees and included a vibrant red flower graphic.