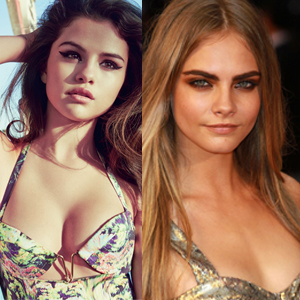 Selena is growing to be at the top list of Cara Delevingne’s ever extensive list of BFFs. The 21 years old Duo, Selena and Cara were seen having the time of their lives on a yacht trip at St. Tropez, France. Selena and British Model Cara have become pretty tight friends together and was seen flaunting their super hot bodies down on the Beach enjoying a complete Brit style vacation one day before Selena’s 22nd Birthday on 21st July, 2014.

The bad girls arrived in a helicopter and instantly instagrammed their first picture of a fun filled adventure at St. Tropez. Later they arrived at the beach where Selena Gomez was wearing a sexy white colored one piece costume, ready to jump into to the water to have some fun; while Cara Delevingne, the beautiful British model was seen wearing a black bikini and cute red shorts. They were accompanied with another one of their friends Eli Mizrahi as they splashed around in the water and enjoyed each other’s company. Selena posted a picture of herself online the white swimming dresses with a caption “Ocean Hear”. In a selfie posted Monday, the young star looked stunning with her locks covering part of her face.