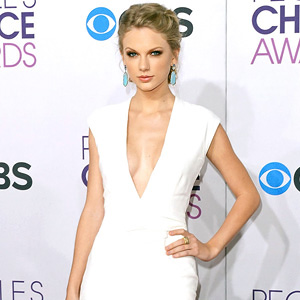 With her blond bangs smoothed back from her forehead, the 23-year-old songstress looked poised amid recent news that she and beau Harry Styles, 18, have parted ways.

The country singer took to the stage to accept her award for Favorite Country Artist early in the evening, but presenter Olivia Munn, who previously joked that Swift’s "We Are Never Ever Getting Back Together" song was about her, wasn’t so eager to part with the statue.

"This always happens," Swift joked gamely as Munn snatched the trophy back from her, referring to the time Kanye West infamously interrupted Swift’s MTV Video Music Awards acceptance speech in 2009. "And it will always happen," Munn deadpanned, before finally letting go of the award.

The "I Knew You Were Trouble" singer was first spotted post-split in the Pacific Palisades, Calif. on Tuesday, Jan. 8. Her One Direction ex, meanwhile, is currently back in his native London, having touched down on Monday, Jan. 7.

The pair reportedly split after having an argument during their British Virgin Islands holiday getaway.

"They had a fight," an insider told Us Weekly of the short-lived romance, adding that Styles "said something he shouldn’t have…This [breakup] is definitely going to be for good." On Wednesday, Swift thanked her fans for their support.