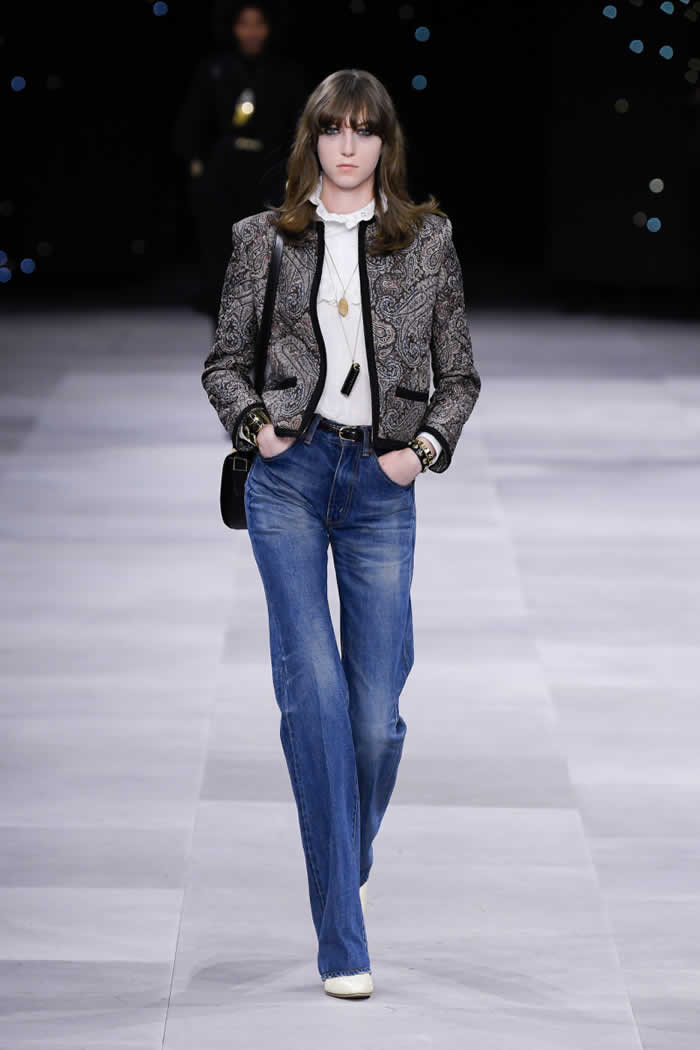 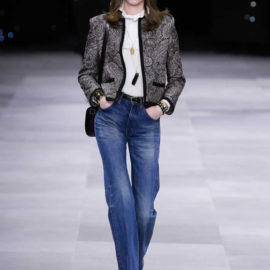 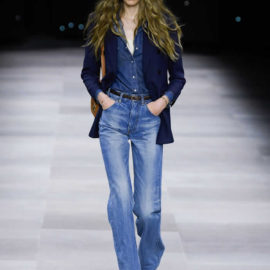 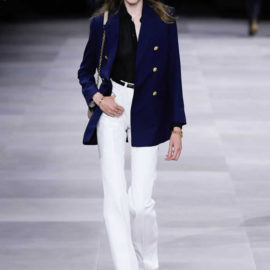 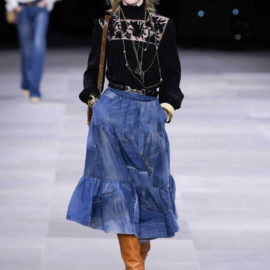 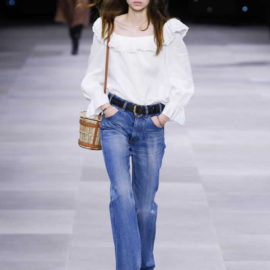 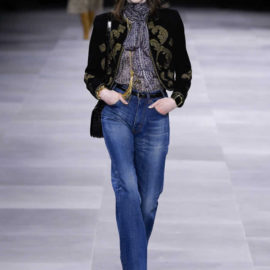 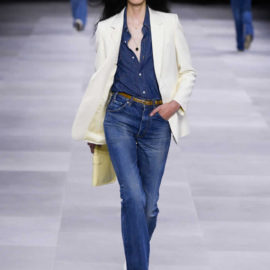 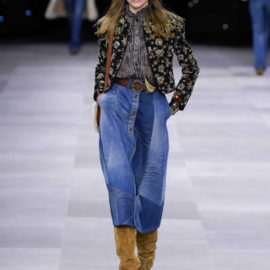 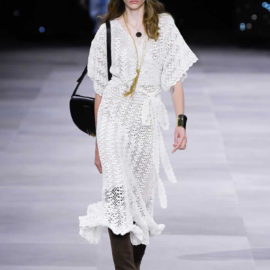 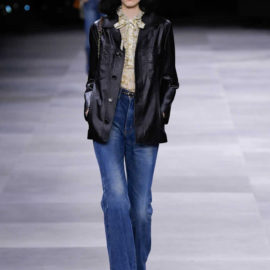 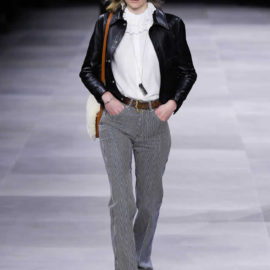 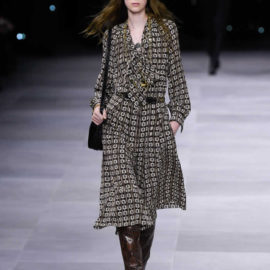 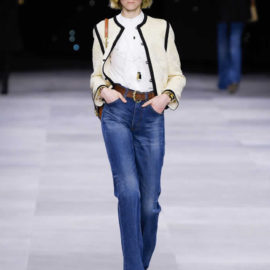 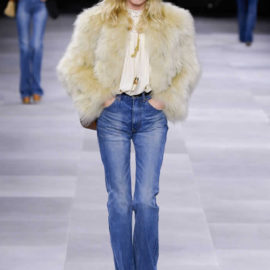 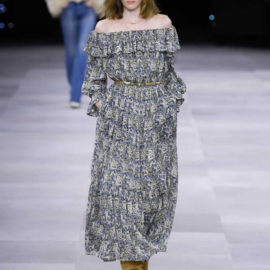 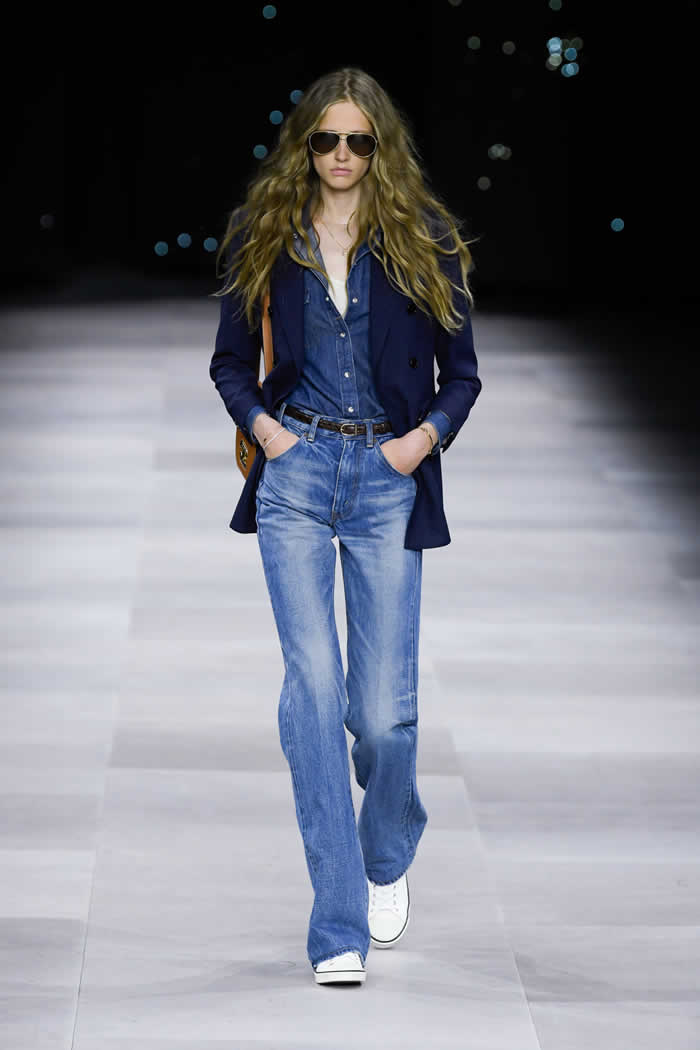 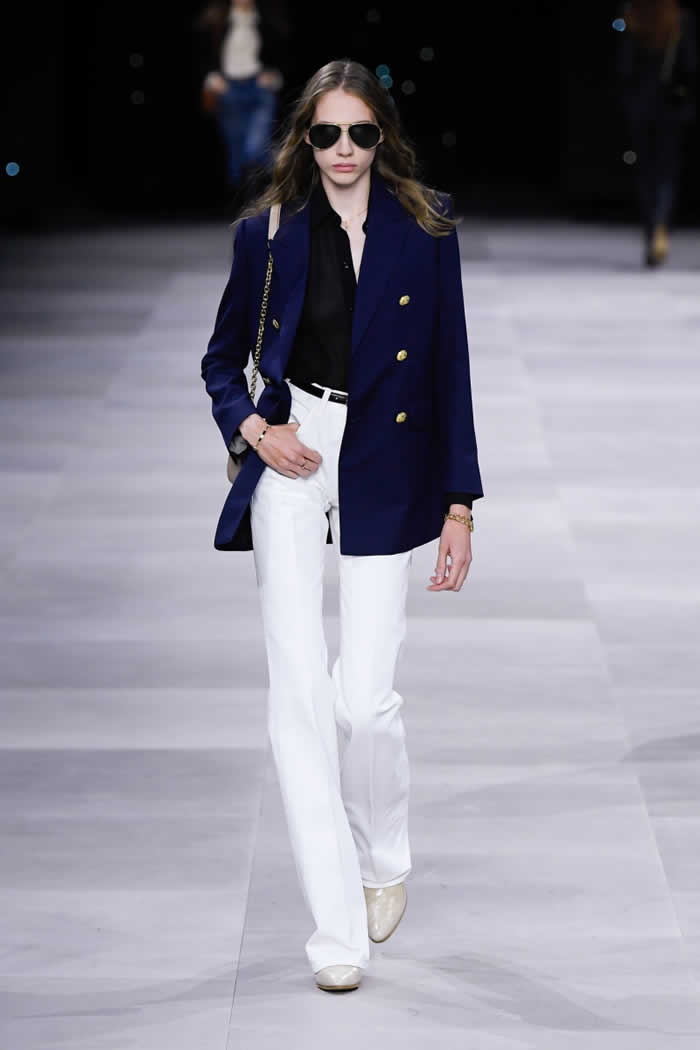 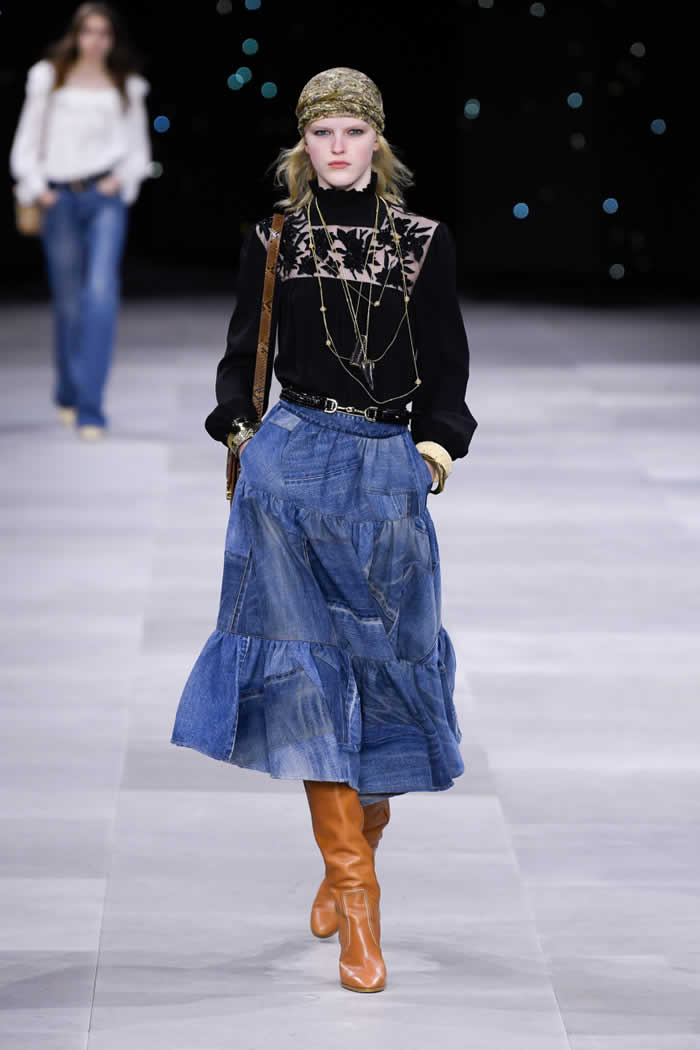 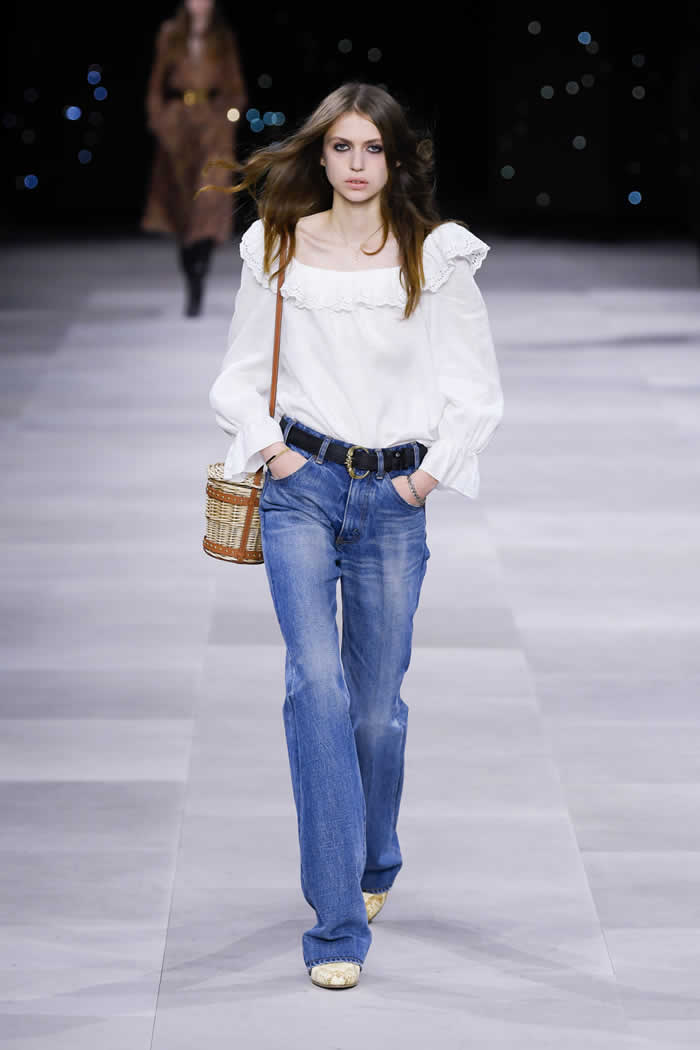 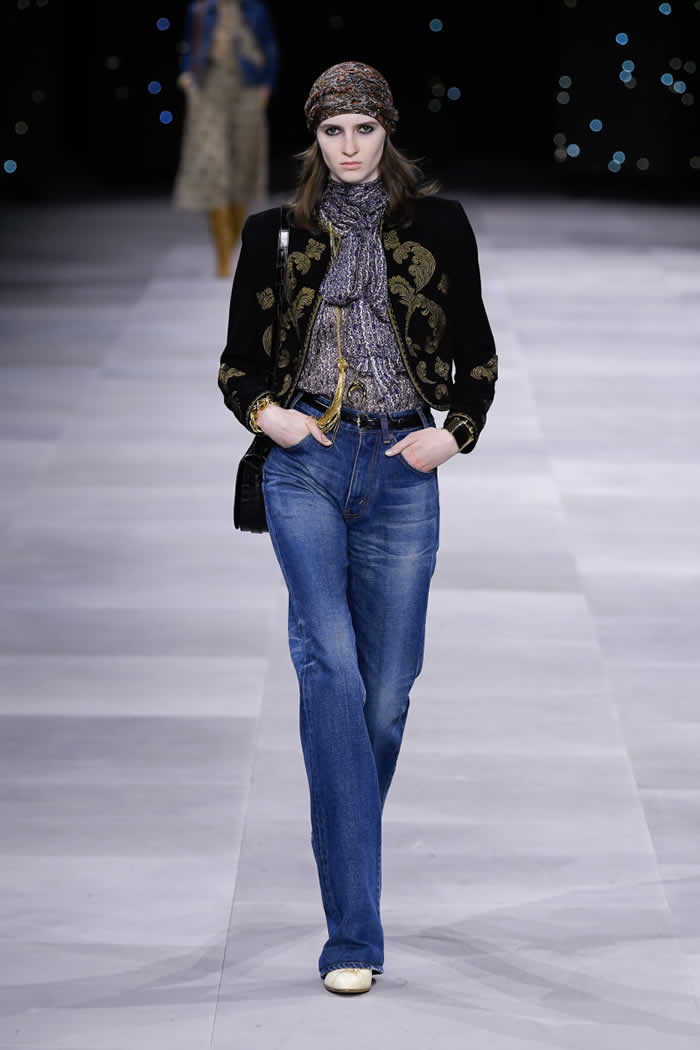 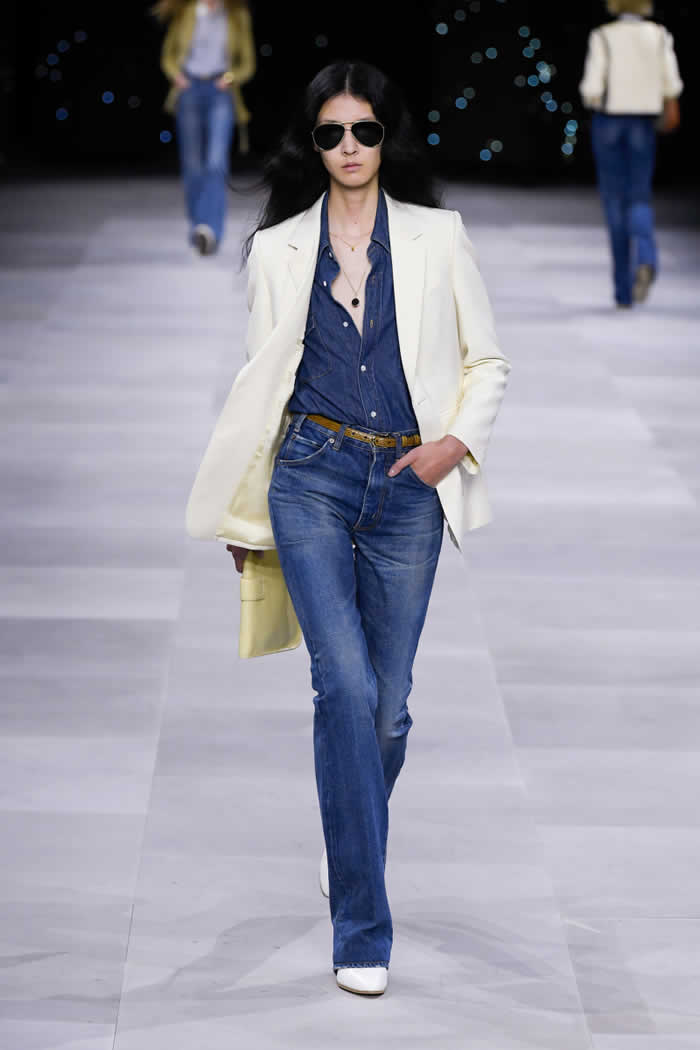 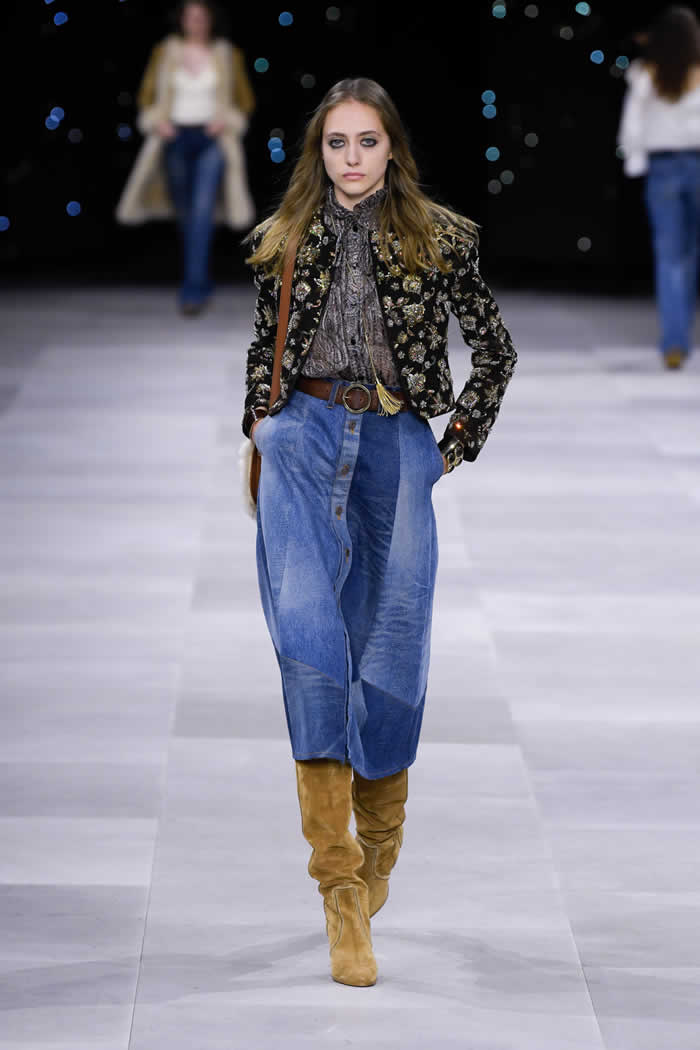 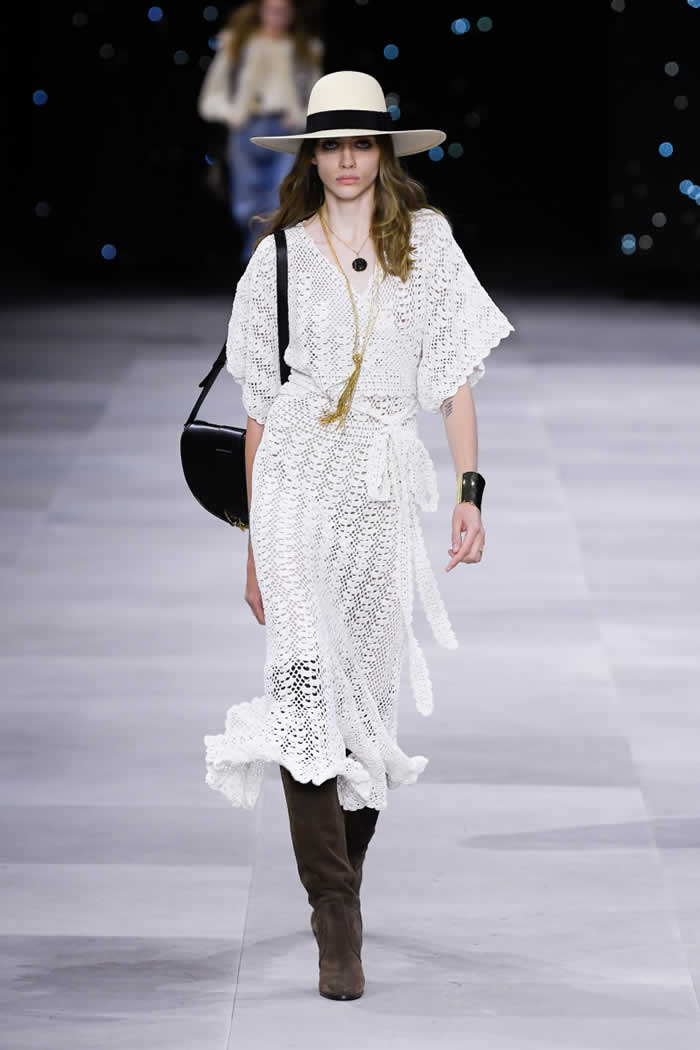 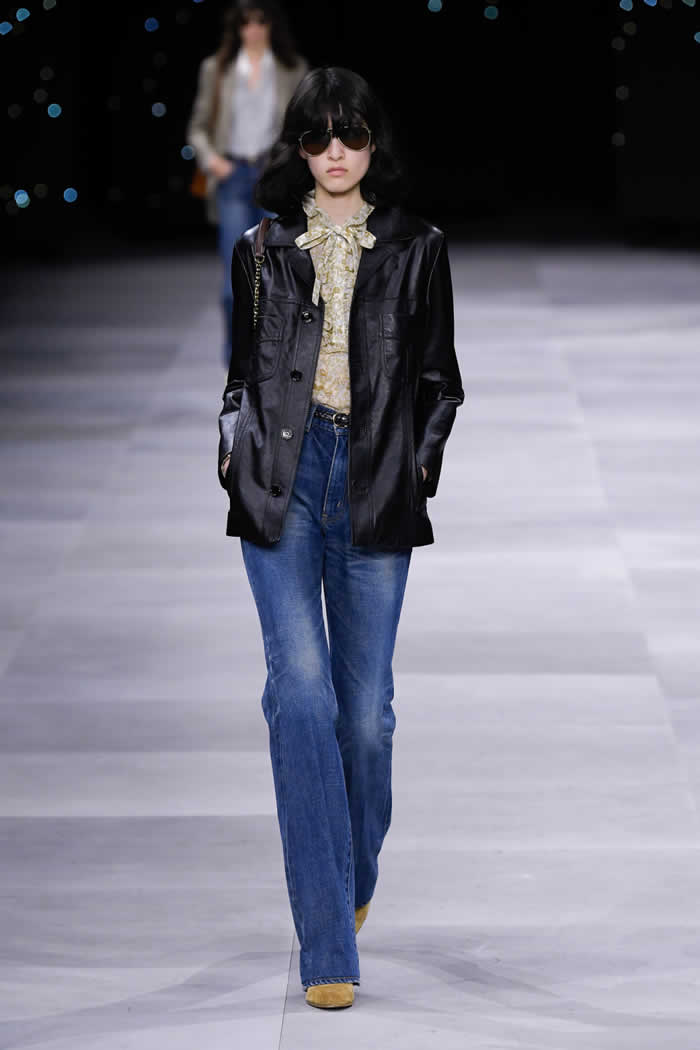 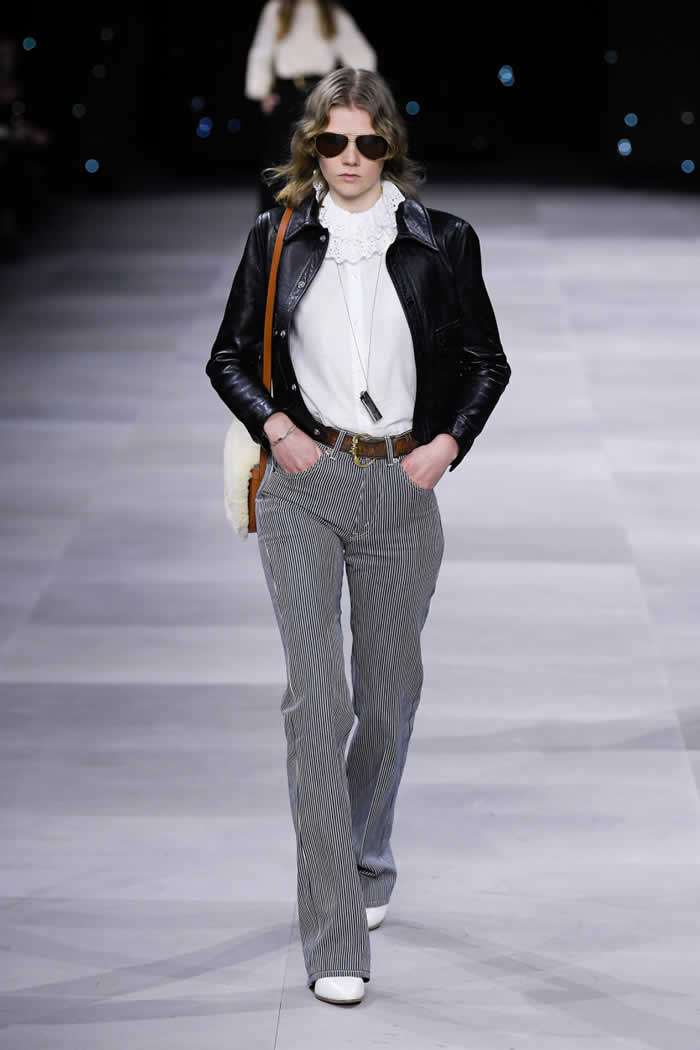 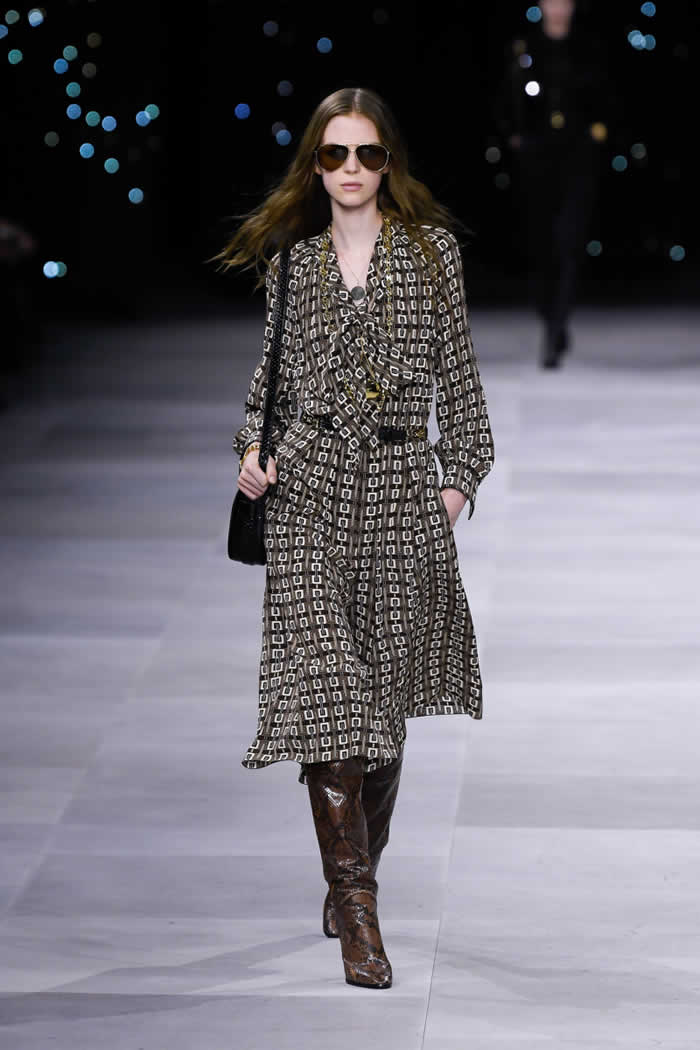 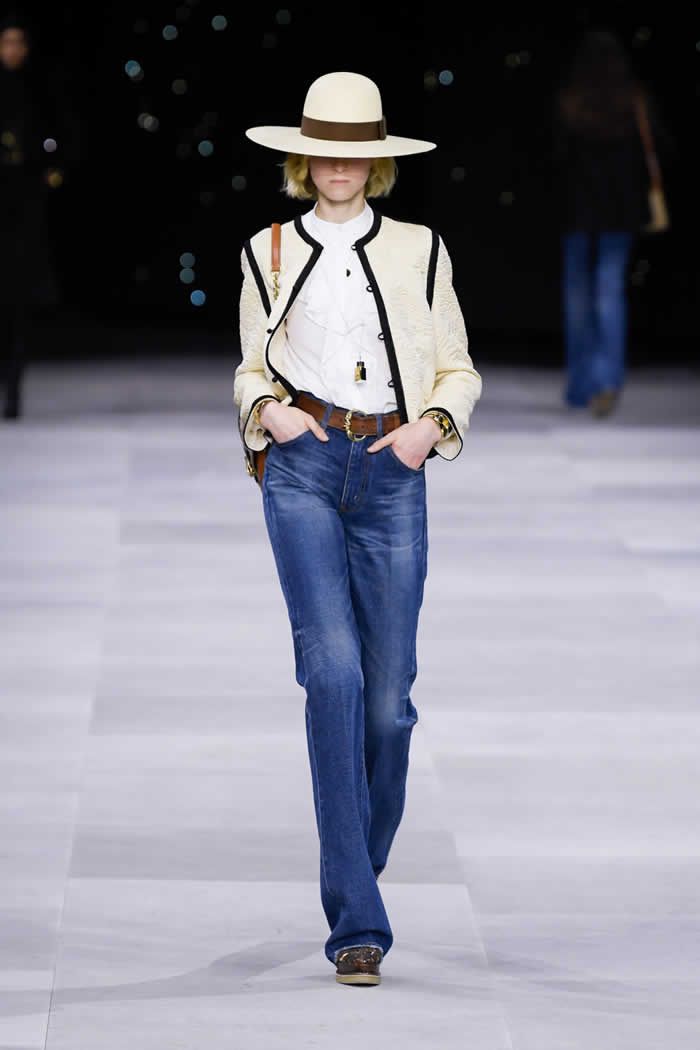 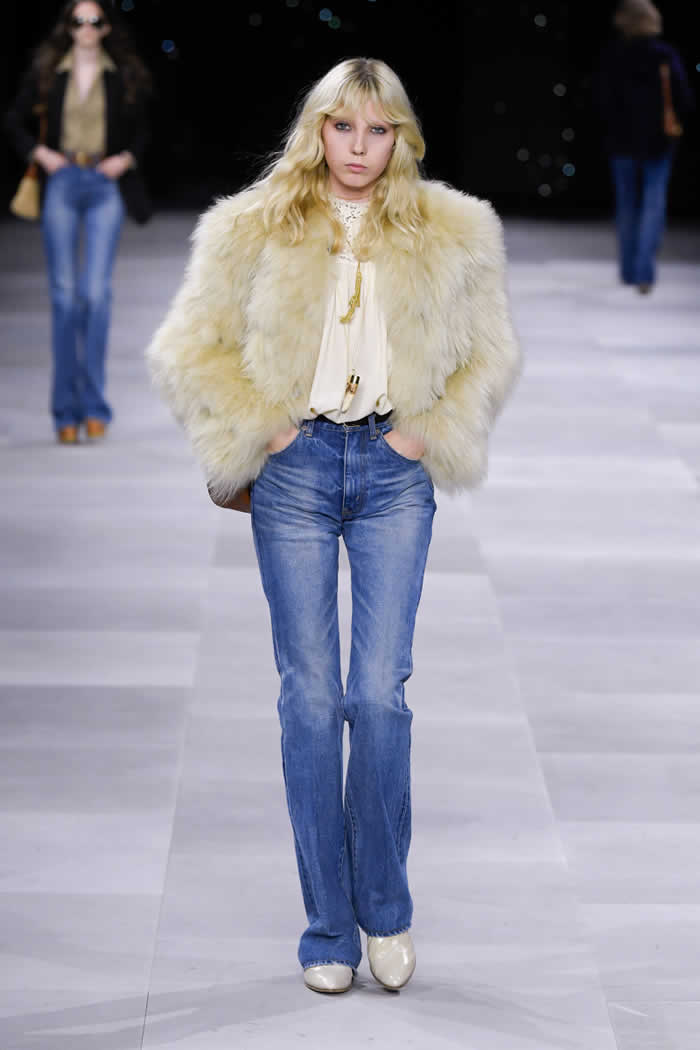 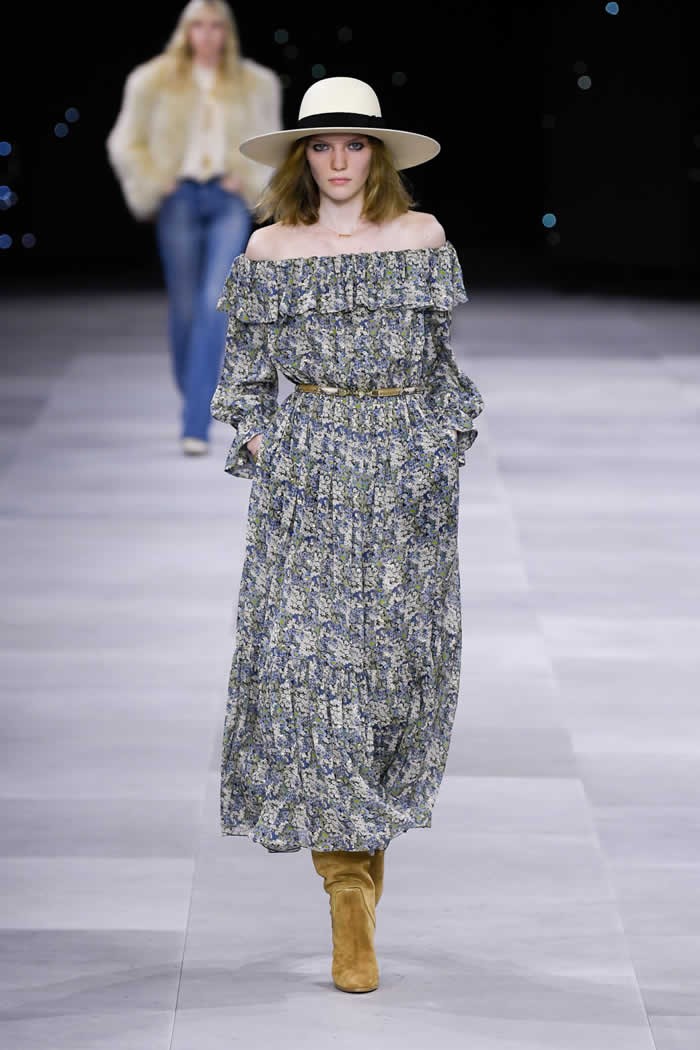 Hedi Slimane went full-on retro in his spring collection. His anchor item: a pair of jeans.

What does it mean to be a designer today? That question underscores every collection Hedi Slimane does, his latest outing for Celine included. Once again, Slimane started with a modernist high-tech light-show prelude, and once again, it announced a collection that radiated retro.

Unlike the wayward adolescent of his Saint Laurent days, Slimane’s Celine archetype is a chic young woman who came of age in the fashionable Paris Seventies, when the era’s empowered bourgeois ascendancy defined its style. Much has been made of the fact that the time was a heyday of the Celine brand, and is thus a natural mining ground for Slimane.

Fair enough; brands with far less grounding in the decade pull from it all the time. (There’s a reason beyond our romantic notion of era. Seventies style started from a baseline of simplicity and ease, which has proven timeless.) Slimane showed numerous dresses, full-skirted printed lovelies worn with boots that, Celine-ness aside, has a strong waft of Saint Laurent. (There’s no getting around it; more than anyone else, Yves Saint Laurent defined Seventies Parisian chic.) Slimane reprised these dresses in beautiful embroideries for evening.

But for the most part, he went casual. As in jeans casual, to a degree that stunned, even within the well-known parameters of his work. Of 63 looks, 24 were jeans, and another three, denim skirts. (Perhaps accidentally, that focus worked two sides of the sustainability dialogue. On one hand, the denim appeared to be washed; if done by standard methods, not so good for Mother Earth.

On the other, Slimane endorsed jeans as the single most important item in a woman’s wardrobe, and no other piece of clothing gets more use or has a longer run than a favorite pair of jeans — good for Mother Earth.) Most of the jeans were boot-cut and some, tucked into boots. They went variously with a jacket and blazer, trench, shearling coat, romantic blouse. All functional, attractive pieces, and all you’ve seen before.

Nothing on Slimane’s runway felt designed in the traditional sense; the clothes looked like replicas. Which circles back to the question of what it means to be a designer today. Is it about trying to find something new to say, or speaking to the moment in a fully familiar vernacular? How does the cult of personality play in? Lord knows marketing has muscled in on invention.

As the oft-quoted Coco Chanel reminded long ago, genuine brand-new-ness is virtually impossible to achieve; fashion is about derivation. But should a designer at the luxury level at least seek to tweak? Or is delivering well-presented, savvy basics enough? No answers. Just questions.