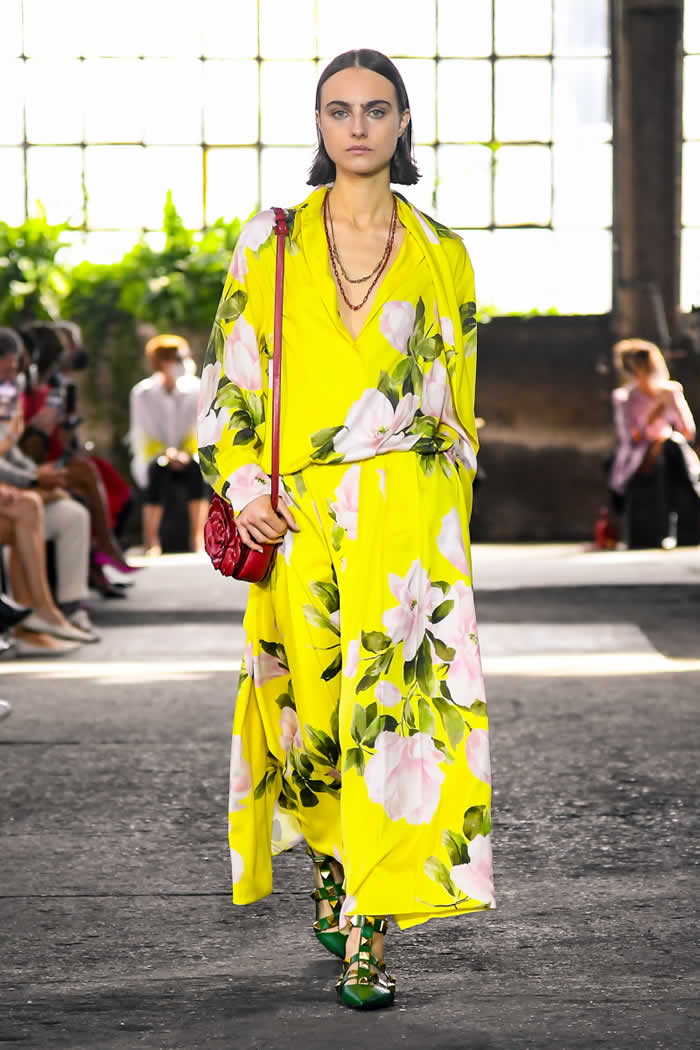 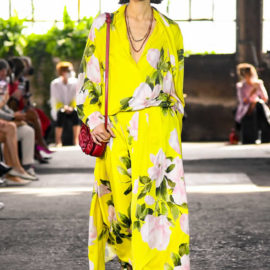 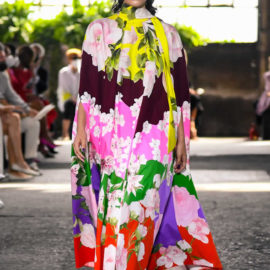 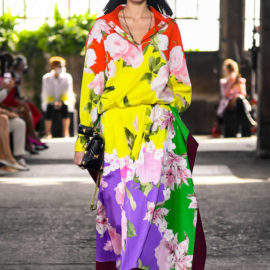 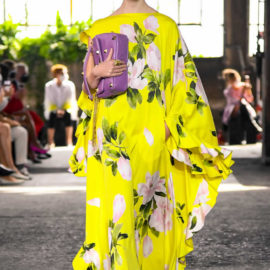 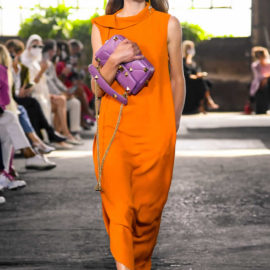 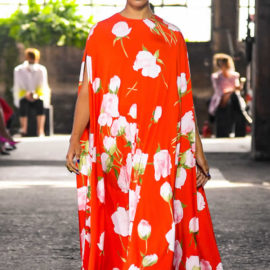 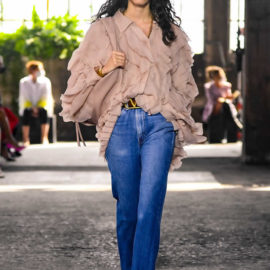 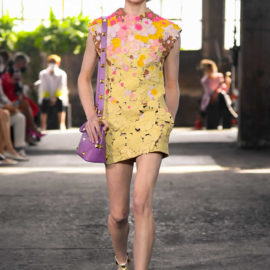 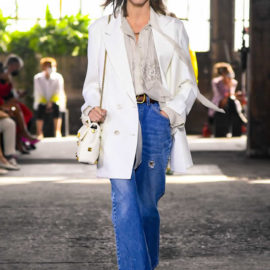 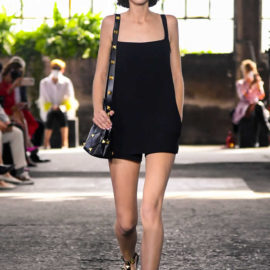 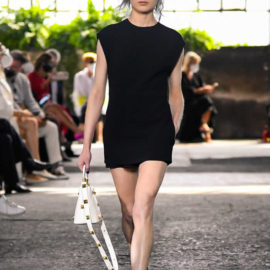 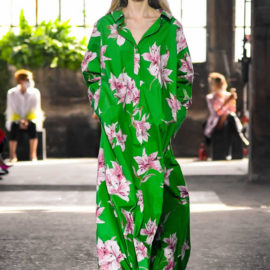 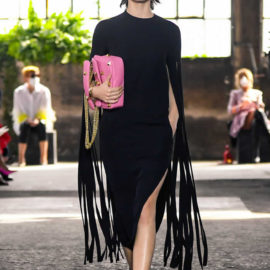 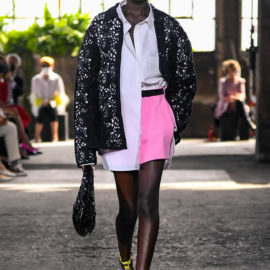 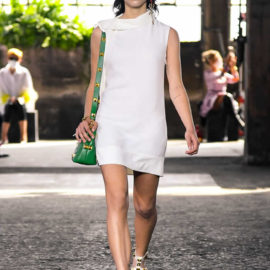 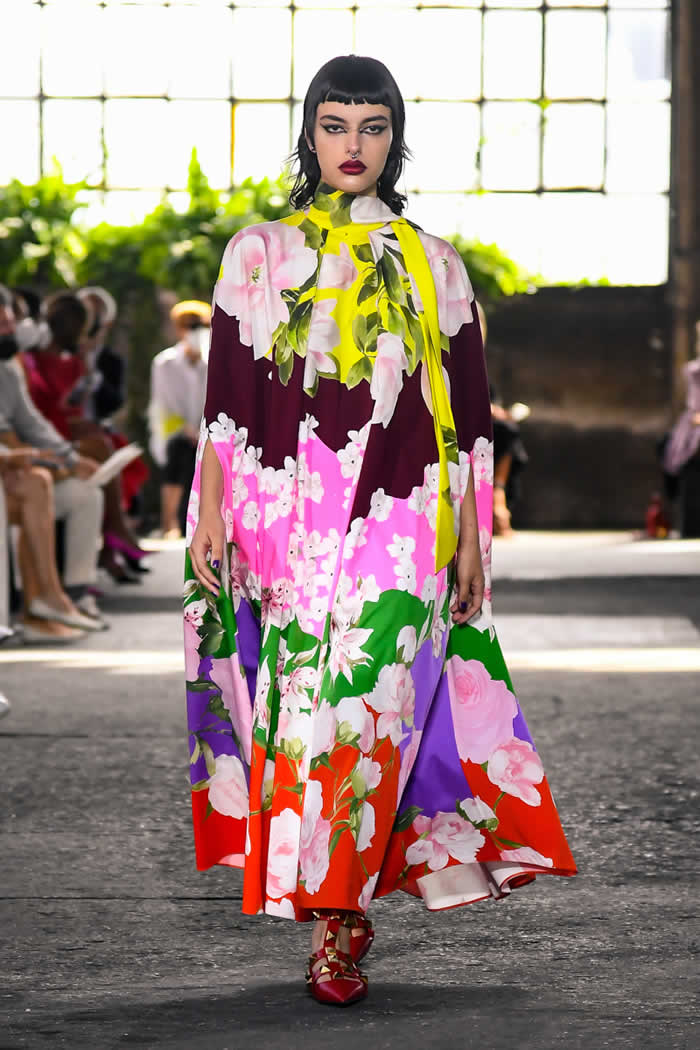 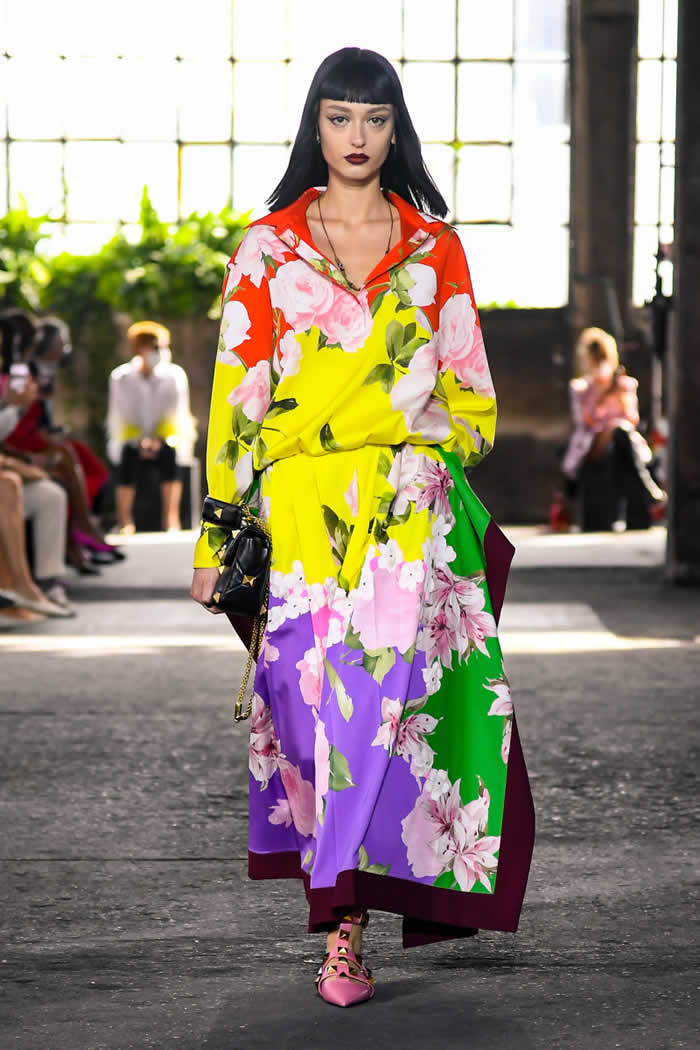 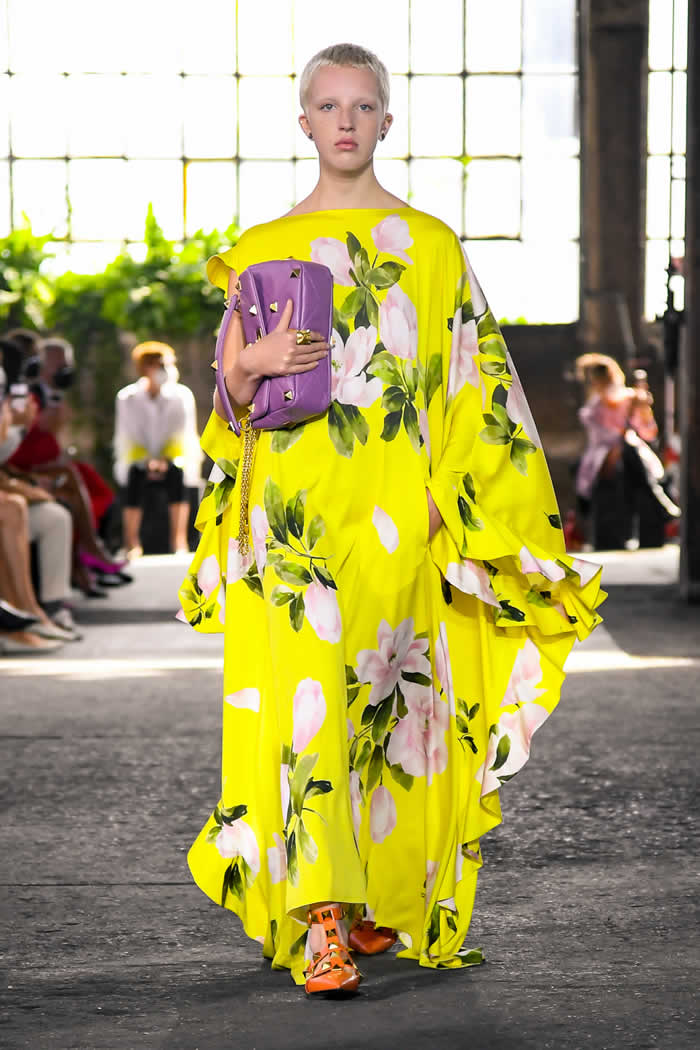 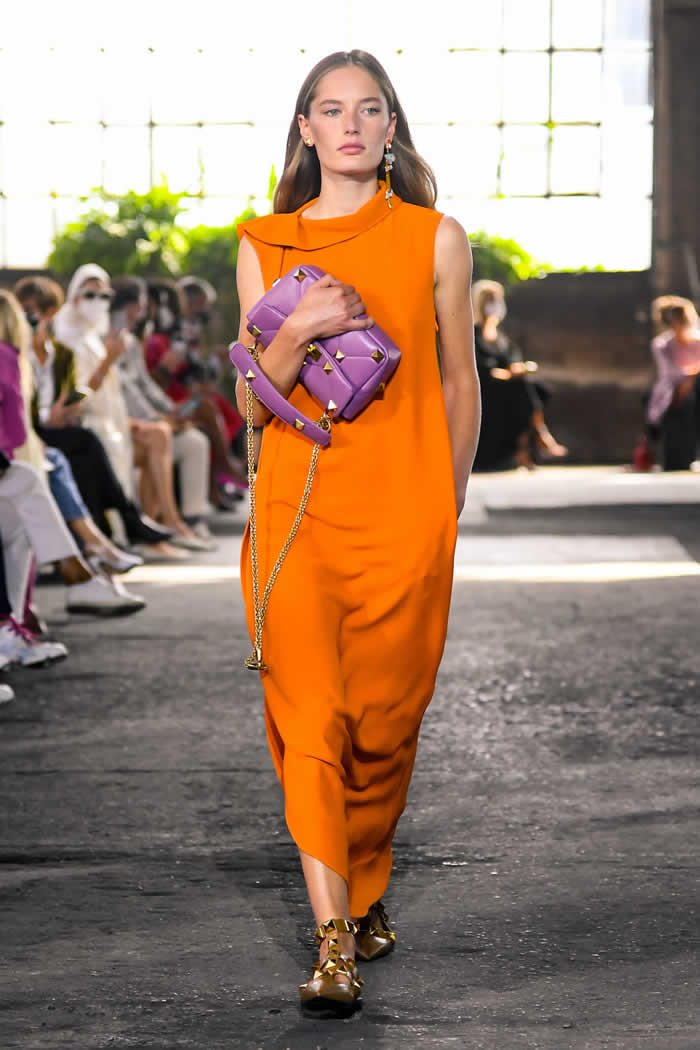 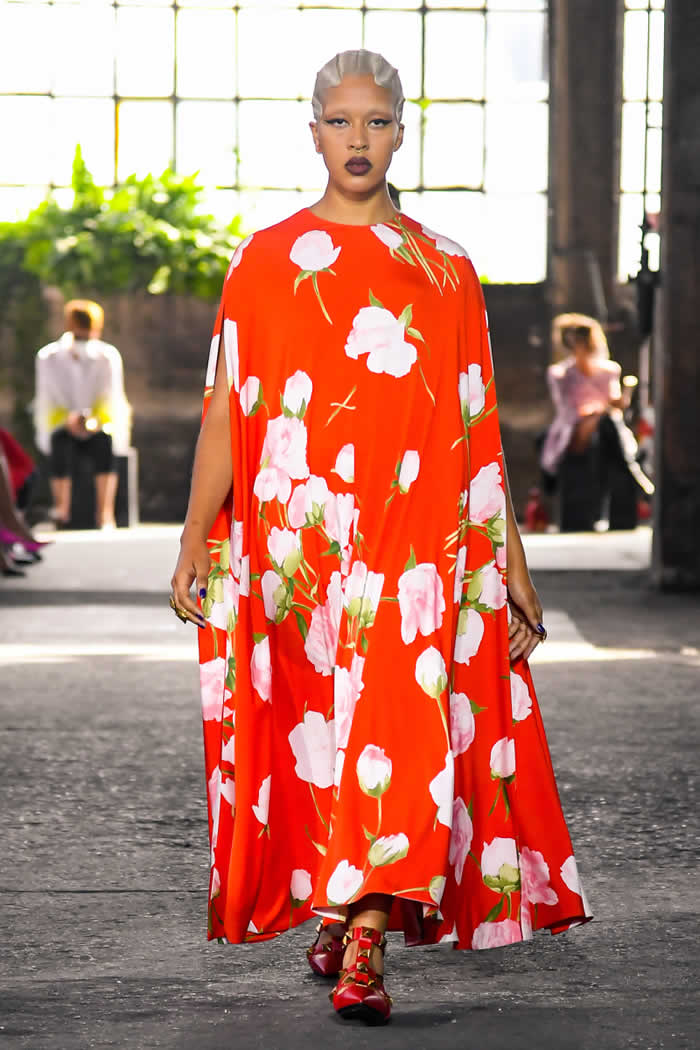 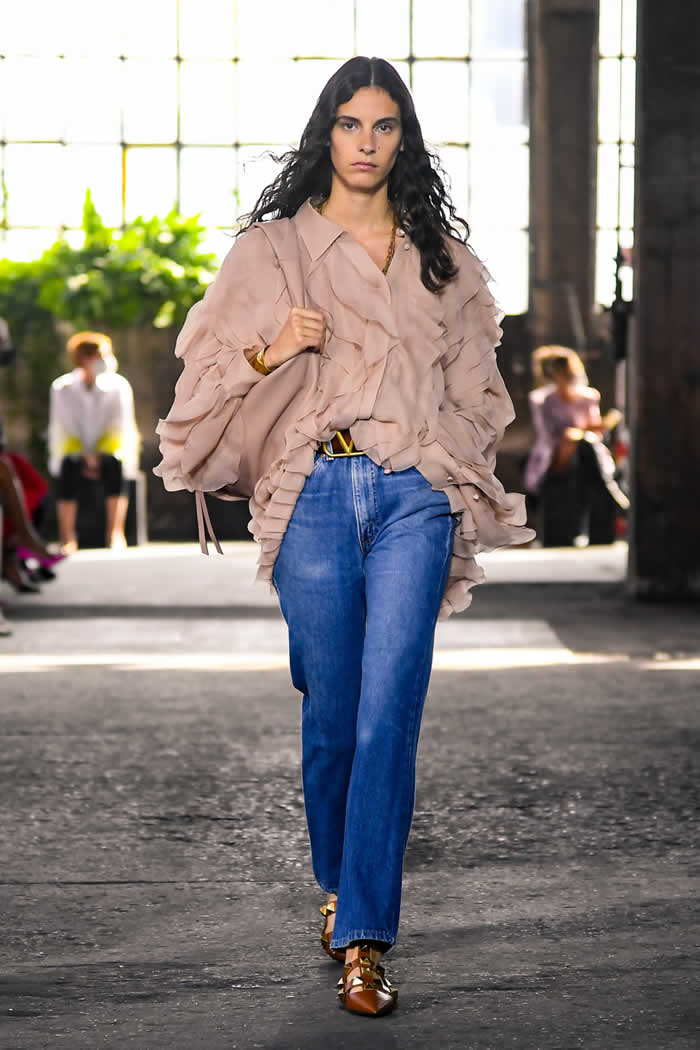 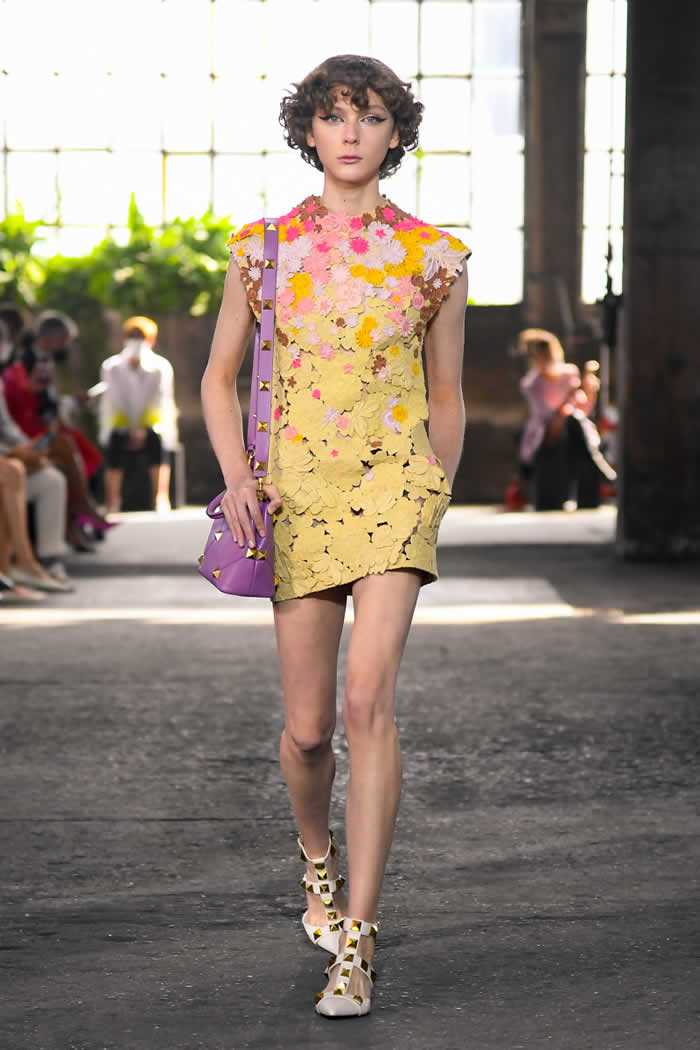 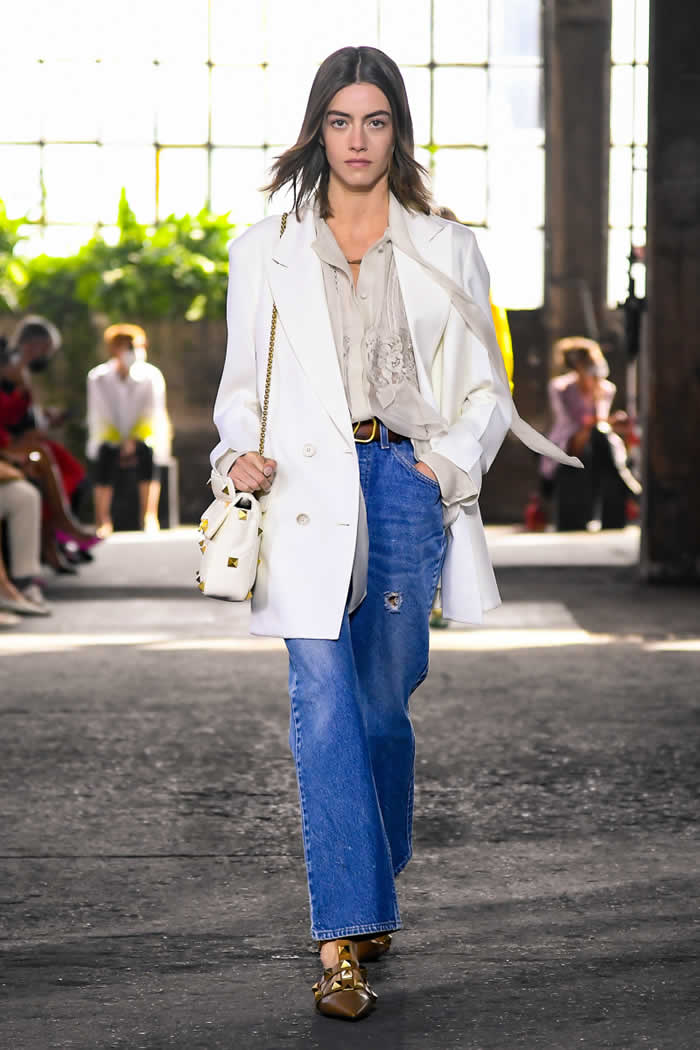 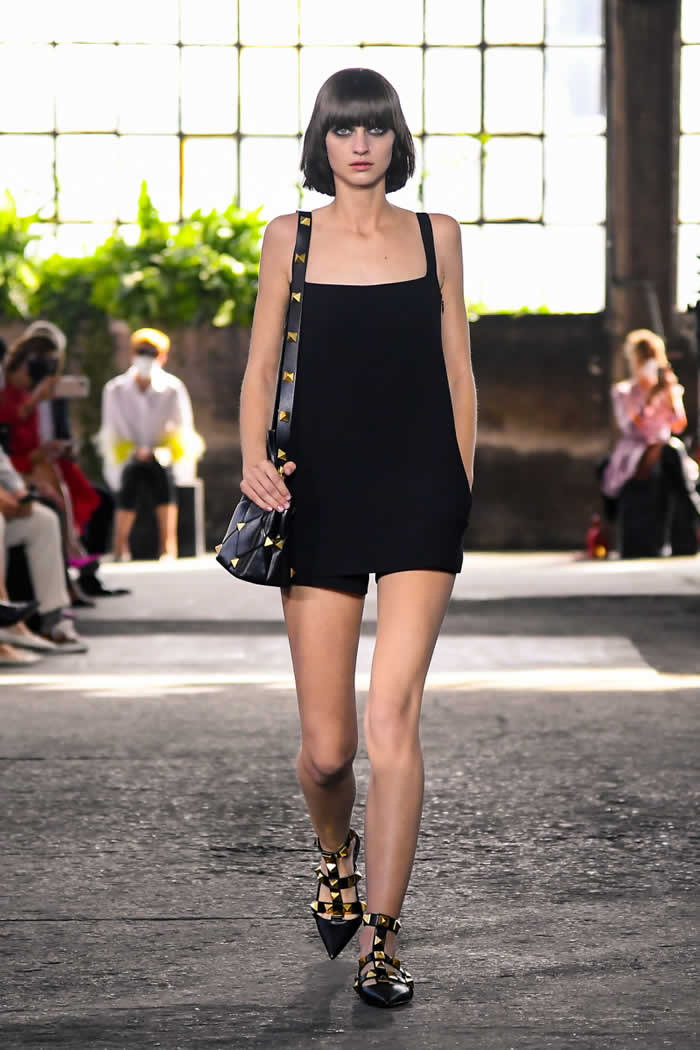 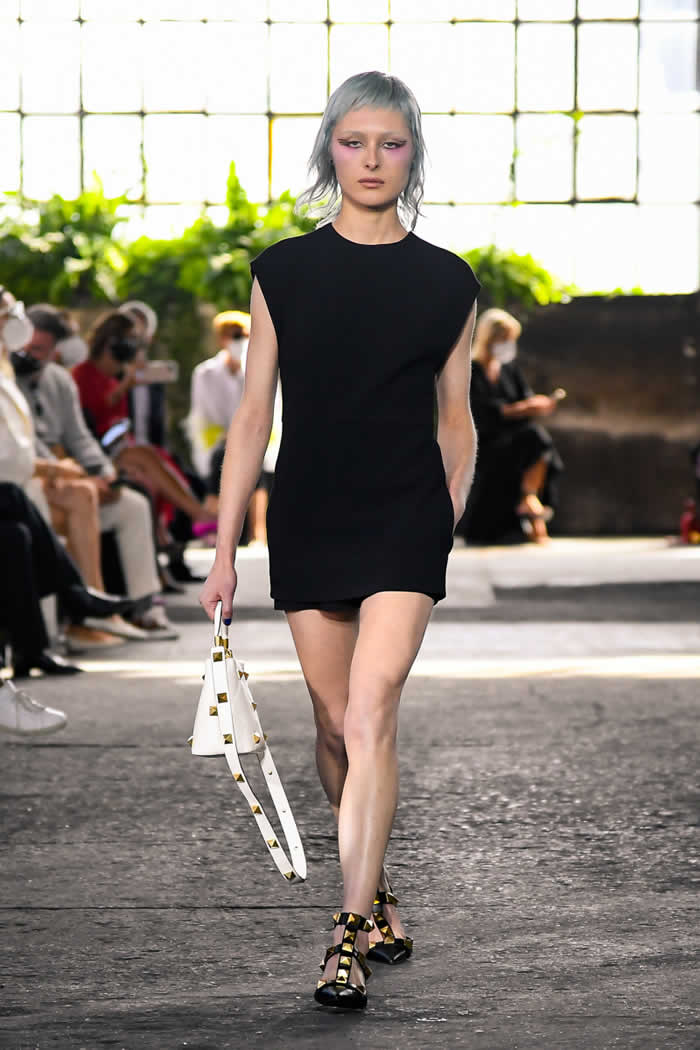 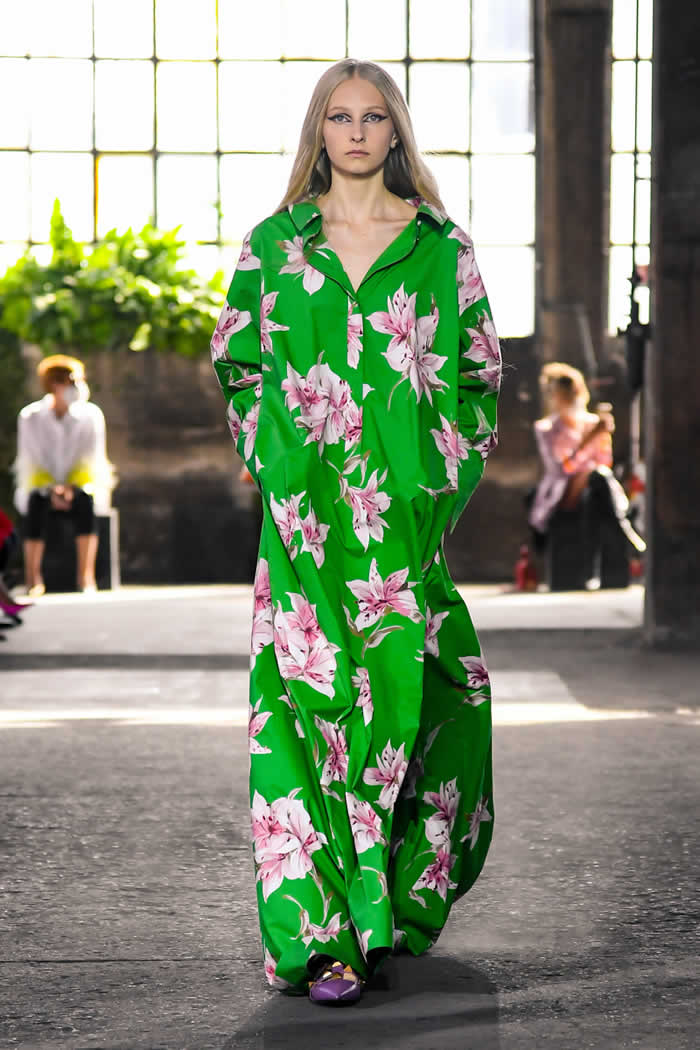 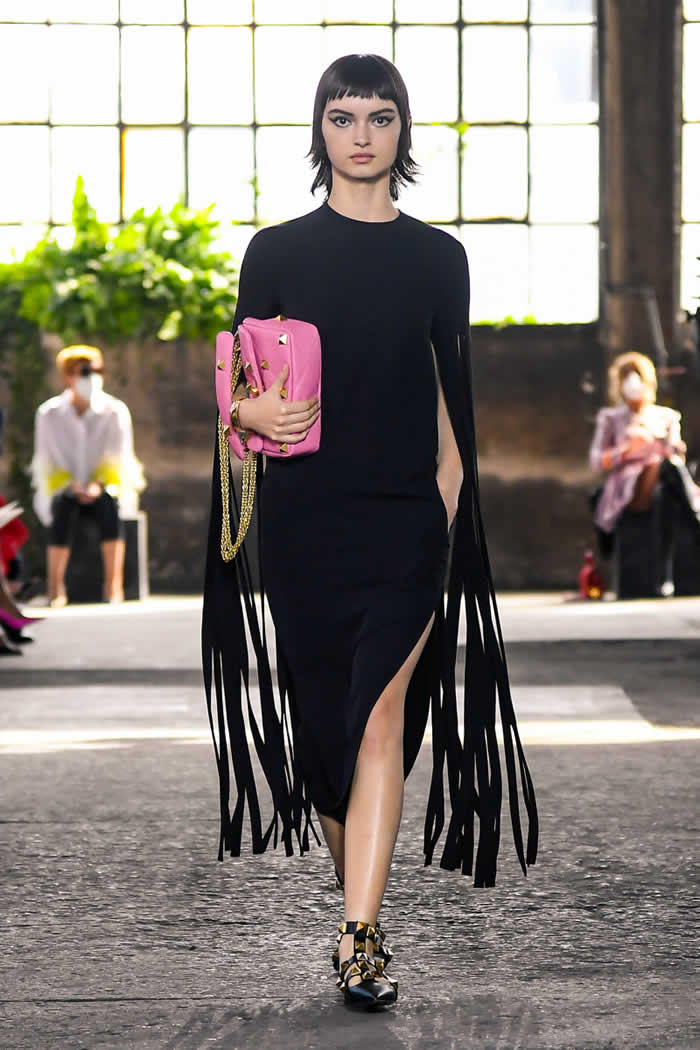 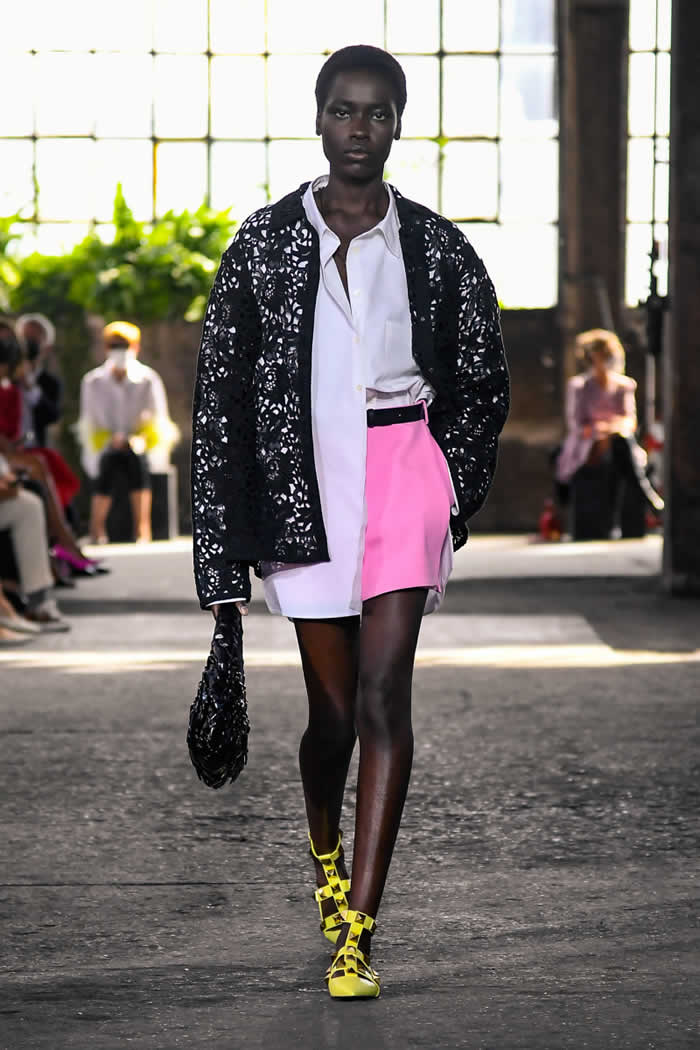 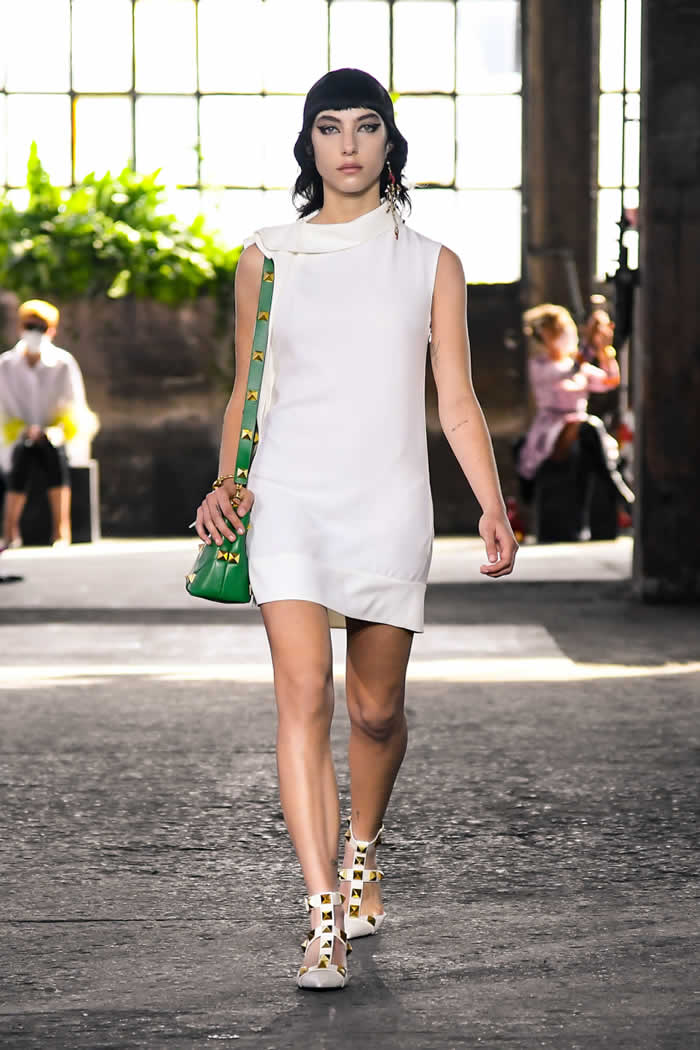 Pierpaolo Piccioli succeeded in delivering a beautiful collection that mirrored his need to further inject his personal point of view to render Valentino more in sync with the times and inclusive, while maintaining the brand’s codes.

Pierpaolo Piccioli has a mission at Valentino. “I want to resignify the brand and how it is generally perceived. It’s like a different take on a familiar landscape.”

Speaking after his show on Sunday, Piccioli proved he is not afraid to challenge himself, after years of delivering directional collections and leaving his own mark on the storied brand.

The designer is set on further injecting his own personal point of view to render Valentino more in sync with the times and more inclusive, while maintaining the brand’s codes. He specified, however, that this new course is “more about identity rather than aesthetics.”

For his coed spring 2021 collection, those house codes were there — flowers, lace and ruches, Piccioli admitted, but he asked himself: “What does romanticism mean today?” His response was: “Individualism, freedom of expression, diversity. This romanticism is not about being pretty but it’s an approach to life, it’s individual, emotional and not objective.”

This translated in several ways on the runway. First, in an inclusive casting, “each a person and not a model,” who would represent the world of today, he explained, and free to be their own individual self — green hair included.

“I did not simply want to tick the boxes, each person has a unique story to tell and that is what I am interested in,” Piccioli clarified. “Fashion should mirror the world and not give unreachable models.”

The decision to show in Milan for the first time and not in Paris was made at the end of August, he said, in light of the safety concerns connected to the pandemic and flying his employees between Italy and France.

Piccioli set about finding a location that would exemplify his new vision for the brand and he realized he did not want a stately palazzo in the vein of the Hôtel Salomon de Rothschild, where Valentino generally holds its shows in Paris. Instead he selected the industrial Fonderia Macchi, a former foundry. “I was interested in the architecture and giving dignity to the people who used to work here.”

He left it as he found it, dusty floors included, but tapped plant artist Satoshi Kawamoto to create clusters of greenery that appeared to take over the location.

“These flowers are not fragile, they are usually a decor but in this case they are a sign of strength,” mused Piccioli. “I am very happy to be in Milan and to support it at this difficult moment, and the move also gave us an opportunity to see Valentino through a different perspective.”

To further set the mood, the designer treated his guests to a poignant live performance by British musician and Primetime Emmy Award winner Labrinth, who composed the score for the Zendaya-led HBO drama series “Euphoria.”

As for the clothes, Piccioli telegraphed his new vision from the first look out: He redefined the classic little black dress, now a very — very — short one, over black shorts.

He worked with lace for daily use, on a biker T-shirt or on sheer blouses paired with denim jeans, revisiting the 517 boot-cut model from 1969 — one he himself used to wear — in a collaboration with Levi’s.

Freedom of expression, in Piccioli’s book, also means many of his designs are suitable for both sexes. Case in point: his men easily wear shirts embellished with lace and macramé embroideries and crochet tops and sneakers. Masculine blouses were feather-light in chiffon. “I want Valentino to be more inclusive, there are no frontiers, gender or sex.”

Piccioli looked back to an archival image of Anjelica Huston wearing a floral gown and re-elaborated it in a series of colorful tulle gowns and cape dresses. The alternative to these blooming — literally — designs were ruched, sheer chiffon gowns in a vivid rainbow color palette.

A delicate dress exemplified the craftsmanship of Valentino’s seamstresses, as it was made with straw. It was couture-like, but fresh and young. So was another short look entirely made with cut-out flowers. A crochet dress with appliqué crochet flowers was another standout.

As for the accessories, Piccioli revisited Valentino’s successful Rockstud series by expanding the studs in a macro version on flat sandals and bags, which also came oversize. The designer admitted it wasn’t easy to produce the show in these turbulent times, but the result was definitely worth it.