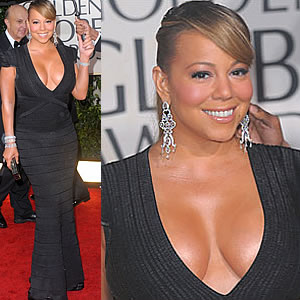 Hollywood celebrities need to understand that their fashion stylist are not always right and for once they should learn to say no to their stylist and follow their own instincts.

Mariah Carey doesn’t need an award but somehow she does not have a fashion sense and somehow makes herself prominent by wearing deep cleavage, so what can one do about it. This celebrity brings her own ‘Golden Globes’ wherever she goes.

Anna Paquin, the worst fashion celebrity always has the hottest accessory with her ‘True Blood’ co-star and fiancé Stephen Moyer, which is why her outfit looks too much weird and while looking at her we felt that she attracted every scrap of metal in sight, and her dark peep-toe booties really weighed this look down at Golden Globes.

Jennifer Morrison, doesn’t like to be in fashion celebrity list, however, she gets the trophy of being the worst fashion celebrity who wore her own dress instead by Puerto Rican designer Luis Antonio. Her friend bought it for her for Christmas but lifeless colours and tiers do not blend well.

January Jones does a complete 180 from last year’s razzle-dazzle Versace number, opting for blah schoolmarm style instead in this all-black Lanvin frock. Nominated for Best Actress on ‘Mad Men,’ she was also the worst fashion celebrity.

She might be getting praise for her song-and-dance number in ‘Nine,’ but Fergie looks more like a three year worst fashion celebrity doll with super dark locks, way too minimal makeup and a lavender dress that would be perfect.

New Code of Conduct For Models