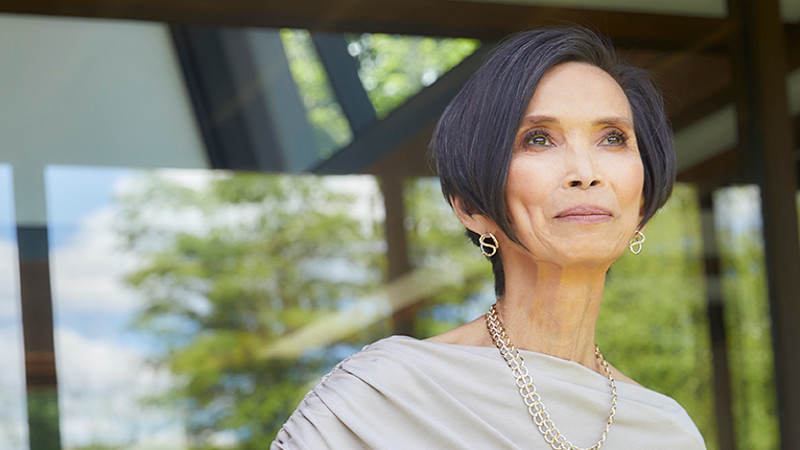 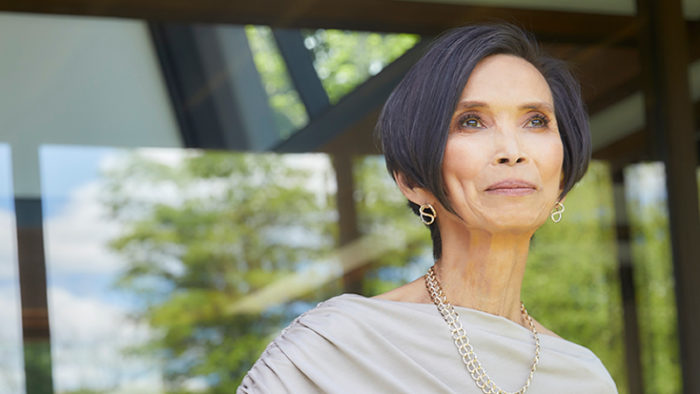 The founder of her namesake luxury lingerie and sleepwear brand is expanding into jewelry, footwear, men’s, pet wear, and more.

They’re overflowing with shiny fabrics and brightly colored swatches from far-flung locales, such as Japan, Morocco, France, Turkey, and her native Philippines. There are various prints and porcelain figures and bronze souvenirs, too.

The founder and chief executive officer of her namesake luxury lingerie and sleepwear brand ​​— a self-described shopaholic — uses an eclectic mix of textiles and other artifacts from her travels around the globe as inspiration in her designs, not to mention her own wardrobe. Hence the tailored dress in a glossy black fabric and fitted belt she’s wearing on a recent afternoon.

“I’ve been wearing dresses since June,” Natori told WWD. “I’m just dressing for myself. I don’t care if I’m not going anywhere.

“That is really the essence of what Natori represents,” she continued. “You don’t have to go to a museum or travel to see art. You aren’t restricted to just looking at art. You can wear it; you can live in it.

Natori kind of brings the wonders of the world into someone’s life. That’s very much the philosophy of Natori: bringing art into life with an East-West sensibility. I’m an artist at heart.”

That’s why this year, as the Natori company nears its 45th anniversary, the designer is expanding her vision — and assortment — across multiple categories.

There’s swimwear, activewear, medical scrubs, jewelry and pet wear, all of which have launched in recent months. Footwear and men’s loungewear are coming this fall. Handbags are on the horizon, too, although the exact date has not been confirmed.

“Every company has to keep evolving,” Natori said. “Not everyone necessarily wants just pajamas. And it’s exciting to have this ability as a brand to expand into other categories. And the lifestyle of the younger generation is very different: How they work out and how they live and what they like to wear and all that. For example, with activewear, we’re gaining a whole new generation that doesn’t necessarily care about sleepwear.

“But everything we have in the portfolio, we have for a reason, things that are connected to the sensibility of the brand,” she continued. “We’re very deliberate and we’re very careful. We don’t rush into anything.

We spend a heck of a lot of time on everything we do. People have no idea what it takes. It’s not like I just bought something and put it together and I produced it. No. There’s such love and work that goes into everything we do.”

Natori launched the brand in 1977, a career change coming from Wall Street, with her husband Ken Natori acting as a silent partner. Back then it was just sleepwear. It wasn’t until the ‘90s that lingerie was added to the mix, followed by ready-to-wear.

“I showed — from our living room in our apartment — the 23 sleepwear styles [of the first collection to buyers],” Natori said.

“When we started in the business, 45 years ago, we were very fortunate that we were received so well,” she continued.

“When we started, we were nothing. And there were all these brands that were high-end brands and all that and they are no longer around.

I’ve never taken that for granted. I always say, ‘Never say that you’re successful.’ You can’t ever think, ‘Oh, I’m so great.’ Because there is always someone out there who is better. The moment that you say that you’re dead.”

Today, Natori is available in Nordstrom, Dillard’s, Bloomingdale’s, Neiman Marcus, Bergdorf Goodman, and Saks Fifth Avenue, among others, as well as specialty stores throughout the U.S., ships to more than 15 countries by way of Natori.com and can be found in select third-party retailers in the U.K. and Europe thanks in part to a partnership with Dana-co.

There have also been freestanding stores along the way, including a shop in Paris that opened in 1986 and lasted for 12 years, a boutique in Manila in the Philippines in the late ‘90s and a store in New York’s NoLIta neighborhood that was open for three years.

The website is Natori’s main store these days, although the CEO said she’s not opposed to opening new brick-and-mortar locations if the timing and resources were right.

“Stores are not going to go away, as much as people are saying department stores are [going away], of course, they’re not,” Natori said. “They’re just evolving, changing with the times. Maybe there are too many stores.

There will be fewer stores in the future. But there will still be stores. The stores have to be edited and a much better experience, because nobody has the time nowadays to go shopping.”

This is precisely what the designer said has been so challenging in recent years, in the age of the internet and increasingly fast-paced lifestyles, as scores of digital brands pop up every day, eager to take share. But Natori added that competition is a good thing.

“It makes you keep working harder,” she explained. “And we do. There are so many brands trying to enter the market. That’s just the way it is. So you always have to be on your toes. We always know what [the competition] is doing. We don’t ignore them. Some of them I admire. I admire what Kim Kardashian West’s Skims is doing. But we can never be that.

It’s the brand’s hallmark East-meets-West flair that might be what keeps it in style for the new generation of shoppers.

“That’s something we flaunt. We don’t hide it,” Natori said. “My Asian heritage is, without a doubt, a foundation of a point of differentiation of the brand, in terms of the sensibility. If you want Americana, that’s not us.”

“People know the prints from far away are Natori,” the designer explained. “There’s a certain amount of glamour and color and exoticness that the brand brings to the table, whatever category it is, whether it’s in men’s wear, whether it’s in sleepwear.

At the same time, fit and comfort are something that I think is a promise that we deliver. Even in our home accents, it has that flavor. It’s an East-West thing, a combination of my two lives.

“I think that’s where we stand apart, particularly in activewear,” she continued. “It’s not just about being athletic or sporty. It’s also about feeling feminine and glamorous. The Josie brand is a lot happier. It’s not so serious.

Shoppers come back time and time again because they know what they’re getting is quality and it fits right and it’s feel-good fabrics. I do believe that today the consumer is king and value is important. Whatever you’re offering, it has to be worth the price.

“My goal is to be relevant to the next generation,” Natori said. “So we have to keep reacting and hopefully growing with the consumer. And at the end of the day, we’re going to be here. We’re here for the long term. A brand that is going to live beyond me, I hope.”