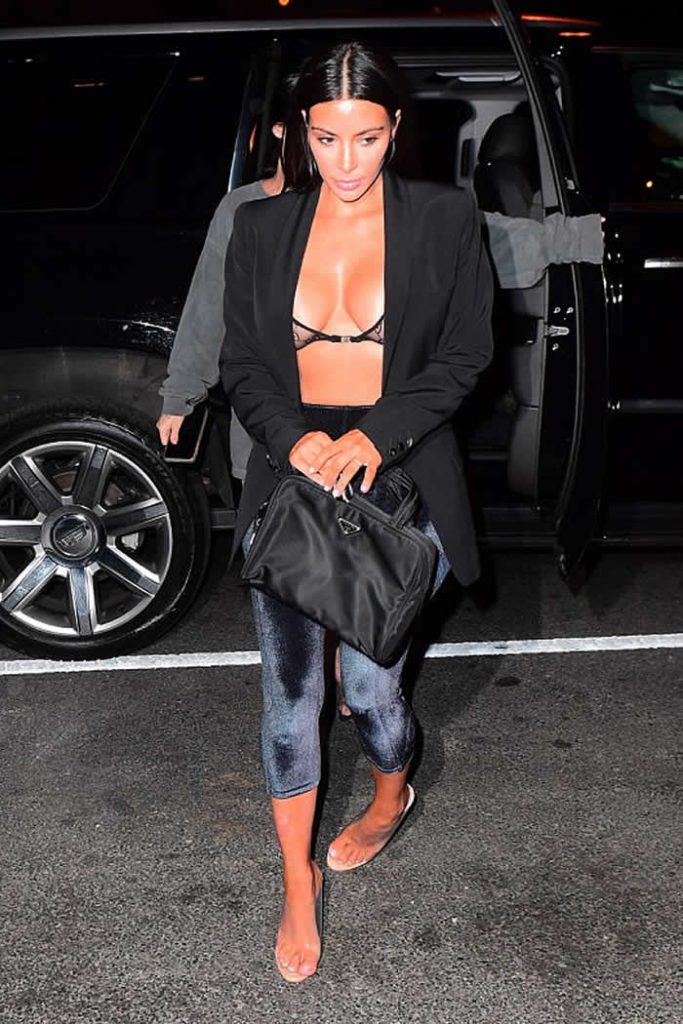 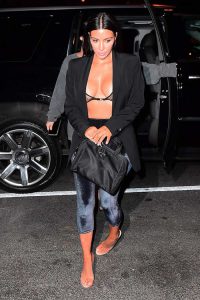 She flaunted her legs in leather bicycle shorts with a white shirt and blazer during her outing with daughter North on Monday afternoon. And hours later, Kim Kardashian changed into something a little more revealing for dinner.  The 36-year-old entrepreneur flashed major cleavage in a sheer Gucci bra, paired with skintight velvet bottoms and a blazer. The KKW makeup founder also put her flat stomach on display, as well as her toned legs. Kim’s lingerie inspired top featured the Gucci logo emblazoned all over the see-through black material.  The designer bikini-style top featured a gold clasp in the middle while barely containing her assets.  Kim styled the racy look with a tailored black blazer, which she opted to leave open. The beautiful brunette hit the pavement in PVC wedges, which are likely from her husband Kanye West’s Yeezy line. The mother of two rocked another designer piece – a nylon Prada handbag. Kim styled her long brunette locks sleek and center parted; the shiny tresses cascaded down her back. The wife of Kanye West used pink gloss on her full pout, with a touch of liner on her lids and bronzer to accentuate her cheek bones. The stunner finished off her glamorous ensemble with neutral nail polish and her delicate diamond wedding ring. Earlier in the day, Kim revealed new pieces from her children’s clothing line Kids Supply. The new collection featured bikinis, faux fur slides and an orange dress. The gorgeous reality star shared the preview to her Snapchat account; the star added that the new items will drop online Monday. She complemented the luxury item with velvet spandex, which featured a shimmering material and a cropped cut. Leni Klum’s Bio Father Isn’t Seal, and Heidi Klum isn’t the Only Model He Has Dated