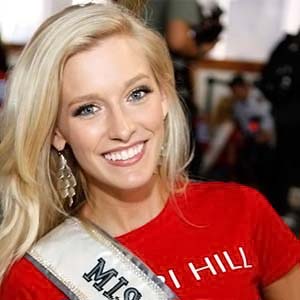 Allyn Rose lost her mother to breast cancer when she was just a teenager, so after the newly-crowned Miss District of Columbia competes in the Miss America pageant in January, she will undergo a double mastectomy as a preventive measure for her health.

Rose, 24, said she would rather remove both of her breasts than risk getting cancer, a disease she is genetically predisposed to because of a gene mutation carried by the women in her family. Her mother was first diagnosed with cancer at age 27, had her right breast removed, and then found a lump in her left breast 24 years later. She died at age 51.

"Knowing I am a carrier I just said to myself I don’t want to put myself through what my mom went through. I want to be here for my kids’ – no pun intended – crowning achievements," Rose said.

Rose, originally of Newburgh, Md., and now living in Washington, D.C., won the title of Miss District of Columbia in June. In 2011, she placed in the top eight at the Miss USA pageant as Miss Maryland. She said that the upcoming Miss America pageant will be her last with both of her breasts.

"A lot of people are confused when I say I’m choosing life over beauty, but it’s beauty as a stereotype, the Hollywood idea of beauty, the physical attributes. I’m not going to let my desire to achieve those goals distract me from my own health," she said. Rose’s family are carriers of Wiskott-Aldrich Syndrome, a rare disease that affects men almost exclusively, but is carried by females. Rose’s mother carried the disease, for which there is a high correlation to breast cancer, she said.

"I met with my surgeon, and the doctors that treated my mom, and doctors are 50-50 with this," she said. "Some say you can put it off, you don’t have breast cancer. Others say it is an incredibly wise decision, your mom was diagnosed at 27, only three years from where you are now, why not make a proactive decision?"

Rose’s decision to be proactive was similar to an increasing number of women in America who decide to have both breasts removed as a precaution against cancer. A 2008 study in the Journal of Clinical Oncology showed that the rate of the procedure, called a contralateral prophylactic mastectomy, more than double between 1998 and 2003.