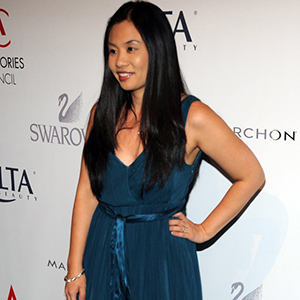 The well-heeled crowd, donned in designer clothes and accessories — of course — arrived curbside in shiny black chauffeured cars. Nominees such as Phillip Lim, Stacy Keibler and Olivia Palermo dutifully conducted interviews and posed for photos, while award presenters Tory Burch, Jason Wu and Tommy Hilfiger among them, made quick trips down the red carpet.

With 14 honorees and a musical act to boot, Karen Giberson, the council’s president, didn’t waste any time moving the show along, as guests nibbled on appetizers of burrata and sun-dried tomatoes.

After about 20 minutes of acceptance speeches from various honorees, a surprise guest, Joan Collins, took to the stage to present jewelry designer Alexis Bittar with the brand of the year award.

The actress and author, who confessed to being “jet-lagged” from her flight from London hours earlier, basked in applause and gasps of the unsuspecting crowd.

“I was really an early admirer of Alexis Bittar before anyone else,” said Collins, who appeared in the brand’s first advertising campaign in 2010. Before leaving, the actress, who played Alexis Carrington Colby on “Dynasty,” offered: “Tonight it gives me enormous pleasure to present Alexis with his award — from one Alexis to another.”

Following dinner and a musical interlude, Hal Rubenstein, InStyle’s editor at large, presented Iman with the hall of fame award, musing about the first time he met the supermodel at dinner years earlier.

“I was blissfully bewitched by my dinner partner. It was the way she sat and stood and moved like a warrior, commanding attention without ever asking for it,” Rubenstein said. “I’m gay, but I have hormones.”

Accepting her award, Iman spoke to the importance of accessories in fashion, before she decided to have some fun with the audience.

With a grin, she thanked the Accessories Council for the honor, and added that she “knows a thing or two” about fame.

“You know fame, my husband sang about it,” she said to the crowd’s delight, before exiting the stage.