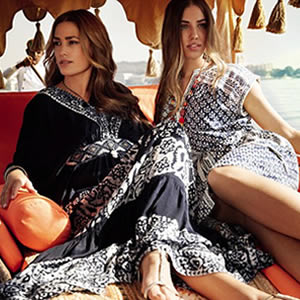 Yasmin Le Bon, 48, looks half her age as she is announced the brand new face for Monsoon's Spring Summer 2013 campaign.

The Iranian-British model features in a laid-back 70s style shoot alongside equally alluring daughter Amber, 23. They almost look like sisters.

The mother-of-three – who has enjoyed a thirty year career and continues to grace the pages of fashion bibles Vogue and Harper’s Bazaar – makes her campaign debut for the London-based global inspired brand, following in the steps of former Monsoon supermodels Rosie Huntington-Whiteley, Lily Donaldson and Alessandra Ambrosio.

The campaign was shot by iconic fashion photographer, Anders Overgaard in Rajasthan, India; the heartland of hand-block printing and the location of Monsoon’s original 1974 campaign shoot.

Yasmin’s daughter, Amber, is seen alongside her mother modelling the Limited Edition Heritage Collection in celebration of Monsoon’s 40th Anniversary.

Don’t Let Us Tell You Gigi Hadid Had One Heck of a Year; See For Yourself